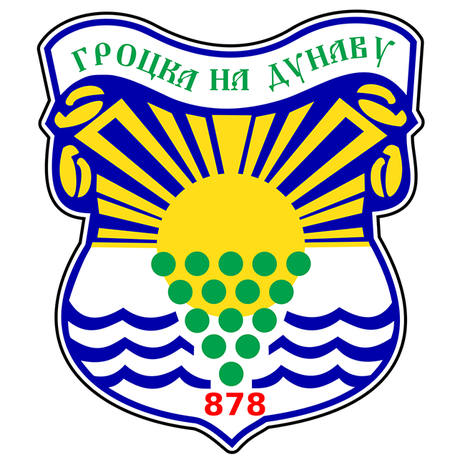 The municipality of Grocka is tucked away only 25km away from the center of Belgrade. The terrain is intersected by three rivers - Ralja, Bolecica and Grocica and has since the ancient times been very attractive to settlers.

This municipality is mentioned under the Slavic name "Gardec" (meaning 'guard') for the first time in a writ by a Bulgarian Episcope in 878.

Much later, in 1521, the famous Turkish travel writer Hajdar Celebija wrote in his journal regarding the conquest of the Turkish Sultan Suleiman the Magnificant in Hungary. He calls Grocka 'Hisarlik' (a fortified military outpost) or in Serbian terms 'Gradiste'. According to Celebija's description, Grocka was a rectangular fortification where the military stored ammunition and wheat. Inside its walls there was a mosque and two small buildings. In a survey from 1560, in addition to a small town with two sections - a muslim one with 11 and a Christian one with 28 homes - there is also mention of a town with a fort and around 70 soldiers.

Grocka was conquered by Austrians in 1717. In its vicinity, 22 years later, happened the decisive battle between Austrians and Turks who conquered Belgrade afterwards. There is plenty of documentation and records left behind from their rule, testifying of an entire era. It is also when one of the most significant monuments - the monastery Rajinovac from the 14th century in Begaljnica - was constructed. In the yard of this building lies the gravesite of the Begaljica knez Ilija Andrejevic Palaija. Within the monastery complex there is also a stream of water which many believe has healing properties, so people seeking recovery and health often visit here.

Grocka is the location of one of the most significant archeological settlements in Europe - Vinca. The oldest remains of prehistoric settlements date back to the Neolithic age (junior stone age) and excavations have shown that in Vinca there was the largest and oldest urban Neolithic settlement on the Old Continent, dating all the way back to 5,500 years BC.

Dating back to this period were also items recovered from Grocka localities such as Agino hill and Dubocaj while in some other nearby places artefacts from the Bronze age were recovered.

It goes to show that for thousands of years back Grocka has been one of the most attractive places for people to live.

From ancient times to Ilija Garasanin

In the Ancient times, Grocka was a part of the Roman province Upper Mesia. During the 1st century, the road between Singidunum (Belgrade) and Viminacium (Kostolac) was paved and alongside it popped up settlements such as Vinca, Ritopek, Grocka and Brestovik where the famous Roman tomb was uncovered - a monumental example of the sacred architecture of that time. The tomb is under State protection today.

Another proof of Grocka's rich history are the Serbian necropolises dating back to the 10th and 12th centuries, that were uncovered in Vodice, Kamena glavica, Podunavlje and Karaula.

Today's main street in Grocka follows the same path as Constantinople road (between Belgrade to Constantinople) that passed through there in the 16th century, representing the most important traffic route. Grocka was the first resting stop for travelers from Belgrade that significantly influenced its growth.

Practically from the very moment the Constantinople road existed, Grocka has been a trade and commerce center. The main street was lined with stores, workshops and of course taverns, but there were also homes belonging to rich traders.

After Austria took over Grocka between 1718 - 1739, it became the seat of the district and the national military. Back then Grocka contained up to 11 settlements which was extremely unconventional for that age. The Austrian powers back then allowed the Serbs to convert the mosque to their own church and they also had their own school.

At the start of the 19th century, Grocka rapidly began to lose relevancy. Most of the denizens of Grocka worked in agriculture, but Grocka still had one trick up its sleeve - the steam-powered mill built by the famous Serbian state official Ilija Garasanin. It was thanks to him that Grocka denizens were able to export flour to Austro-Hungary and this area was able to prosper once again.

Already in the next century, Grocka became a significant supplier of fruit for Belgrade.

Due to the structure of the terrain, Grocka has practically always been divided into a city and village section, and it remains that way to this day. The western part of the municipality, closer to the center of Belgrade, is today more developed because of the hundreds of small companies that were founded there. On the other hand, the eastern part is oriented more towards fruit production and currently is experiencing a decline in population.

Also located in this municipality is the Geomagnetic observatory in Brestovnik, the Vinca Nuclear Institute (that houses the currently only nuclear reactor in Belgrade, even though it's out of commission), the Grocka textile factory (known as Partizanka) and the experimental farm Radmilovac.