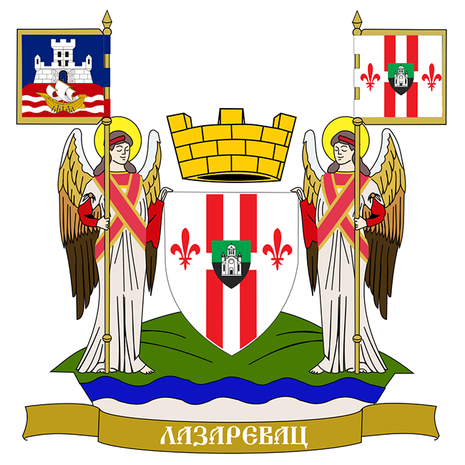 Known for its mining basin Kolubara, the Lazarevac municipality originated on a hill called Zbegovac, in whose barns they collected harvests from the nobles' estates. The first home in this area was built in 1858 by Negovan Nedeljkovic from Sopic, and two years later he got a neighbor in Raja Rajic, also from Sopic. This nameless little place quickly grew, attracting numerous tradesmen and craftspeople who over time decided to appeal to the National assembly of the Kingdom of Serbia and ask for their settlement to get a name.

And so Lazarevac was officially named in 1889. It got its name after the Serbian knez Lazar Herbeljanovic, since on that year they were preparing to celebrate 500 years since the Kosovo battle. Six years later in 1895, the seat of Kolubara district was moved from Sopici to Lazarevac.

That's the official story, however there is also a legend according to which Lazarevac was named thanks to a girl who dazzled the king with her beauty.

Namely, according to legend, around the end of 19th century, the Sopice village near Zbegovac as the seat of Kolubarski srez, hosted the Serbian king. The assembly in the port of the local church gathered everyone, young and old. It was then that the king laid eyes on Ljubica, a beautiful trader's daughter who lived in Zbegovac. Charmed by her beauty, the king started asking around about this graceful girl and he decided to walk by her house. The entourage, including Ljubica, set off towards Zbegovac. When he arrived at her home, the king noticed that there weren't many houses in her neighborhood so he asked the captain where his HQ was situated. He replied it was in Cubutkovci, to which the king asked him "Then who is guarding these beautiful people of mine?" and winked at Ljubica. He then asked his adjutant which holiday it was on that day and upon hearing it was Lazareva Saturday, he said "Captain, you will build your station here, make this place the center and have it named Lazarevac".

Fertile ground and the proximity of rivers have always been a winning combination in attracting settlers to Lazarevac. Proof of this lies in various archeological locations where artifacts from Vinca culture and necropolises were uncovered. There were also traces of Thracians found and the names of the rivers Turija, Onjega and Ljig clearly indicate the origin of the population in this area far before the Slavic tribes arrived. A copper knife was uncovered in 1947 in Great Crljeni as well as copper axes, suggesting that this was an attractive spot to live even in the bronze ages of prehistoric times.

With arrival of the Romans on the crossing between old and new era, vineyards arrive to Lazarevac. The soldiers in the Flavius legion which was seated in Belgrade would be gifted estates in this region after 40 years of service, creating their own settlements. It is believed that the name of the village Arapovac is actually of Roman origin, meaning 'having served their time'.

Over the next centuries history was very tumulus. There were invasions by hordes of Huns, Gepids, Sarmatians, Eastern Goths, Avars...all the way up to the 6th century when Slavs finally arrived and permanently settled there under Byzantine rule after the division of the Roman Empire. Despite frequent invasions by the Huns, Bulgarians and Hungarians, Byzantium maintained its control over this area until the start of the 13th century.

However, in 1284, the Hungarians take control. The Hungarian king Vladislav in 1284 handed over Belgrade and Banat to his son in law Dragutin, along with Kolubara. The control of the area was taken over by Dragutin's brother Milutin after his death and so it continued until the 16th century, with power frequently changing hands between Serbs and Hungarians.

In 1521, Belgrade is conquered by the armies of Suleiman the Magnificent and the entire Serbia falls under Turkish rule.

Further wars between Austria and Turkey brought much grief to the population of this area, which is why eventually, under the lead of Arsenije Carnojevic, the people decided to undertake a great migration. In 1717 Austria regained control over this area, but the Turks return in 1737 and regain rule in 1739. The Austrian-Turkish wars as well as the plague outbreak at the end of the 18th century devastated most of the settlements in this area. The return of the dahijas to Serbia in 1799 and their rule of terror caused malcontent in the people and preparations for an uprising are initiated. Learning about this, the dahias attempted to prevent the uprising by executing prominent Serbian nobles. Among the first killed by the dahijas was knez Stanoje Mihailovic from Zeok, a place belonging to Lazarevac municipality. Between the beginning of the I Serbian Uprising in 1804, up until the return of the Turks in 1813, the people of this region were free for a period of time.

Once Milos Obrenovic initiated the II Serbian Uprising in 1815, the people of the region immediately sided with him. After negotiations with Marasli Ali Pasha, the unrest in Serbia settled down. With a division of the region into smaller areas called 'srez', the area of today's Lazarevac fell under the Kolubara srez whose seat was in Sopic, a place which according to a survey from 1846, had 95 homes and 578 denizens.

Lazarevac and its surroundings were the site of the famous Kolubara battle that took place between 16th November and 15th December of 1914. After a brilliant victory of the Serbian army over a much more numerous opponents, the aggressors were forced to retreat across Sava, Drina and Danube. Around 28 thousand of Austro-Hungarian and 22 thousand of Serbian soldiers were killed in the battle. The bloodiest battles took place around the elevated areas of Covka and Vraceg hill. It was in the latter that the leader of Serbian Socialist Dimitrije Tucovic was killed.

After three years of Austro-Hungarian occupation, Lazarevac and its surroundings were liberated on the 31st of October 1918. Shortly before WWII broke out, the memorial church dedicated to St. Dimitri was constructed in Lazarevac, along with a crypt that housed the remains of all who fell defending this region during the battle of Kolubara. It is unique in that the remains of the aggressors are buried alongside the defenders, side-by-side.

After the war was over, the Lazarevac neighborhood was in a sorry state and it only managed to recover thanks to its hardworking people. The construction of the thermal power plant "Kolubara" in 1937 also played a significant role.

Lazarevac and the auxiliary airport located in its vicinity were both showered in bombs one day after Belgrade was bombarded on the 19th September 1944.

It wasn't long before the Germans occupied this area. The freedom-loving denizens of Lazarevo didn't rest. They immediately formed partisan and chetnik squads that assaulted and sabotaged the occupation wherever they could. Lazarevac itself was liberated on 19th September 1944.

In post-war period aggressive industrialization and coal-extraction was initiated and Lazarevac became a crucial asset for the entire country. The city was connected to the capital with the railway lin Belgrade - Bar and several surface digging sites began to extract coal, the venture only increasing with every passing year. In the village Cvetovac in 1955, the Kolubara srez is abolished and Lazarevac srez is founded in its stead. Two years after, it crosses over into the Belgrade region. In the Recurring Conference of Cities in Titograd in 1964, Lazarevac was awarded the status of a town.