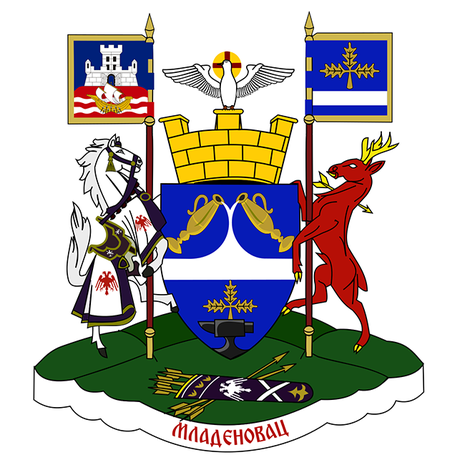 According to legend, Mladenovac was named after a certain Mladen who, with his two brothers, moved to this area which was abandoned at the time, right below Kosmaj mountain after the battle in Kosovo. Over time the brothers drifted apart, new people built houses in the neighborhood and the place remained known as 'Mladenovac'.

The settlement that exist in this area today were mentioned as early as the times of despot Stefan Lazarevic and the first official data about Mladenovac itself emerged in 1528, when the Turks completed a survey of this area.

The place of centuries-old hearths

The territory of Mladenovac has been inhabited ever since pre-historic times. This is proven by numerous archeological excavation sites and around 200 remains of pre-historic settlements. In the Jablanica area in Medjuluzje village, there were traces found of periods as early as 3800-3200 B.C. There were artifacts from the copper, bronze and iron age found in the area.

What's interesting is that archeologists in the village Batasevo in 1998 excavated the 'Protostarcevacko' site which dates back to the 6th millennium B.C. This was where numerous remains of temples and other archeological materials were found as well.

With the conquests of Romans between the II and I century B.C., Kosmaj was turned into a significant mining center. With this rapid development, there was a growing number of settlements and population in the neighborhood.

The area of Mladenovac was also popular during the middle ages, as proven by the existance of Pavlovac monastery that was constructed between the end of the 14th and start of the 15th centuries. This church is considered a foundation of despot Stefan Lazarevic and it was demolished by Turks during the Great migration of people in 1690. Sadly the building waited for reconstruction all the way up to 1963. The monastery church was finished in 1991 and consecrated on 31st October 1999.

It was in the Markovac village, in the church of St. Prophet Ilija, that the monument to despot Stefan Lazarevic was built, right in the spot where he suddenly passed away on 19th July 1427. The monument which is today under state protection, was set up by Djuradj Zubrovic who was the despot's close friend.

The beginnings of Mladenovac date back to 1882, when the railway Belgrade-Nis was constructed. On that occasion the very first building of the future province - the famous Kosmaj tavern - was constructed and it remains standing there to this date.

Around the railway station and the tavern, a new settlement began to develop and already in  1885 the first steam mill was constructed. The area began to prosper and the first junior school began work in 1895 and only two years after on 2nd of August Mladenovac was declared a town by order of King Aleksandar I Obrenovic.

The new status encouraged numerous crafstmen and traders to move to the area. A new railway was constructed connecting Mladenovac - Arandjelovac - Lajkovac, making Mladenovac an important railway intersection and a powerful center for the export of cattle, wheat and corn.

Another pioneer of industrialization of this area was Paja Jovanovic who constructed the oldest slaughterhouse and salami factory in 1907. Nikola Djordjevic, a trader from Kovacevac in 1919 and a year later Sima Jovanovic from Sopot started a sack factory. Upon the slaughterhouse moving to Vrsac in 1926, a certain Janko Badzak from Jagnjilo started the industrial slaughterhouse 1936.

That was how in 1930 Mladenovac became the seat of the srez of the same name to whom the Kosmaj srez was also joined.

During WWI in Mladenovac there was a military hospital where Serbian soldiers were treated from spotted fever.

After the end of WWII, between 1945 and 1955, the Mladenovac municipality was actually just a settlement, to which the villages Mladenovac, Medjuluzje and Rajkovac were joined.

As of 1971, the Mladenovac municipality is included under Belgrade's jurisdiction.

Municipality's day: 2nd of august when Mladenovac was declared a town in 1893.