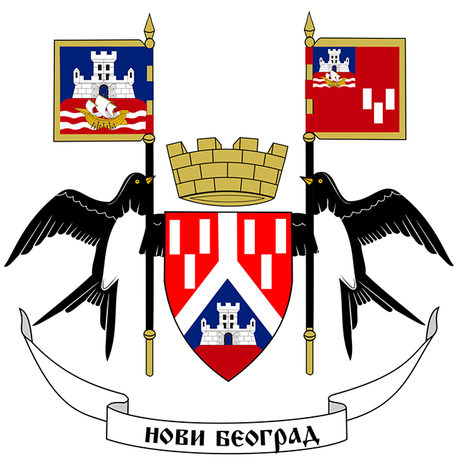 Originally named “the city of light, sunshine and future”, New Belgrade got its name today thanks to its sheer size – a literal city inside a city – and after a tavern from 1924. It was built up from nothing, on top of swampy land which the builders began to dry out in 1948 when construction began.

The first settlements in this area showed up in the days when Turks ruled over Serbia. The book “Krusevski pomenik” from 1713 lists that in 1512 there existed the Bezanija settlement in this location with 32 Serbian homes. In 1819, this number grew to 115.

The ethnicity structure began to change after the Austrian military began to push back the Turks. The Austrian authorities then invited Germans, Croatians and Hungarians to settle in this area which led to an increase in population and the settlement’s expansion. This was how the New settlement and Old fairground came to be.

From a tavern to a municipality

The left bank of Sava had been in the plans for Belgrade’s expansions since year 1923. There was a will, but there was no funds or manpower so this was left to wait for better days.

In the meantime, life kept pushing on. That’s how the hospitalier Petar Kokotovic in 1924 started a tavern in Tosa’s Well and named it “New Belgrade”. The name caught on quickly so in 1939 in Zemun the weekly publication “Novi Beograd” begins publishing. Years later, in 1945, Kokotovic became the first man of the “Novo naselje - Bezanija” municipal community out of which the New Belgrade municipality will eventually grow.

And everything was built inch by inch. In 1924 in Bezanija the airport pops up and four years later the factory Rogozarski follows. Already in 1934 the plans were expanded to constructing the urban core that would connect Belgrade and Zemun. The Sava bridge was constructed, the first tram started rolling and the Zemun airport was built.

In the old fairground (then known simply as ‘the Fairground), in 1938 there was a building complex constructed, intended for fairs and exhibitions to demonstrate the economic development of the Kingdom of Yugoslavia. At the same time a deal was struck with two Danish construction companies to build a new settlement and the entire project was entrusted to the engineer Branislav Nesic.

Gestapo and the barbed wire

The year is 1941. The German troops have just occupied the Kingdom of Yugoslavia and the secret Gestapo police has taken control over the Fairground, fenced it up with barbed wire and turned it into a monstrous camp.

The Fairground became the place of horrific crimes. Until May 1942, the Nazis used it to liquidate Jews, Romani and Serbs. During the occupation, almost 8000 Jews and 32000 Serbs were killed in gas chambers, shot in Jajinci or met with death in the camp itself which remained active up until 1944.

In the report of the Yugoslavian stat committee it was estimated that around 100000 souls passed through this camp and around 48000 people died there.

Three years after the war ended on 11th April 1948, the youth work brigades began the construction of New Belgrade. In the largest construction site of the old Yugoslavia, new buildings popped up like mushrooms. In 1952 this led to the foundation of the New Belgrade municipality which later also integrated the Bezanija district.

The work strikeforce consisted of people brought in from the countryside, but also students and high-schoolers. There was no mechanization so that everything was done by hand and horse trailers were only used for very heavy weight.

Among the first completed objects in a total of 72 blocks was the Federation palace (today Palace of Serbia) and the first residential buildings included the Pavillions near Tosa’s well and then the Students’ town. This municipality also became the home of the largest building in Belgrade, the Meandar, which is a whole 1000m long.

New Belgrade continues to expand and develop. For the needs of the Universiade in 2009, the Belville settlement was constructed and then sold to the citizens for residential purposes, as well as business uses which many companies found in this area.

Sadly, this large city within a city only owns one Museum, which is the Museum of Modern Art. Instead, New Belgrade offers a rich and vivid nightlife around rafts alongside Sava and Danube.

Dusan Spasojevic, the resident of the first pavilion and one of the founders of the “Petar Velebit” shoe factory in Vozdovac and the first president of the Union of the leather-workers in Belgrade. At the same time he was also the first person to move to the newly constructed New Belgrade.

He found his home in the Pavillions in 1953 and he moved into a building located near the “Tosin bunar” tavern while the building was still encased in scaffolding.

The official holiday of the municipality: St. Mary’s shroud on 14th October