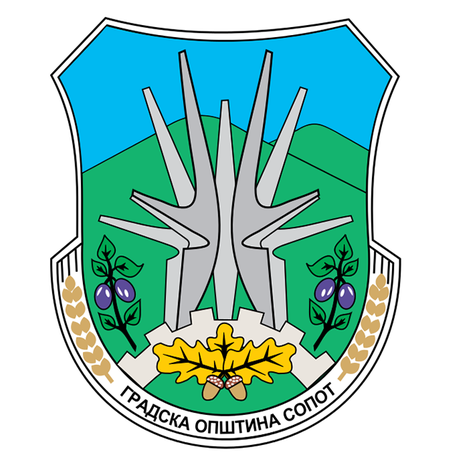 Sopot got its name after an old Slavic word which in translation means spring or downpouring water. The township itself originated from a settlement per order of Knez Milos Obrenovic, near a village called Ropocevo right by a spring called Sopot. Only a few years later, in 1830, knez Milos commanded captain Jovan Vicentijevic to build several cottages for sleeping so that he had a place to spend the night on his way to Kragujevac. Today the Sopot town hall is located in this spot.

The town is first time mentioned under this name in Langer map that was made at the start of the 19th century where Sopot is marked as a separate village near Ropocevo.

With the king's decree from 1893, the place was declared a town and already in October 1905 there was a separate municipality for the township of Sopot. This decision was verified by the Assembly of the Kingdom of Serbia and legalized by king Petar I Karadjordjevic. Sopot joined the other Belgrade municipalities in 1956.

An interesting fact is that a settlement called 'Nemenikuce' is located near Sopot and it's considered one of the most beautiful settlements in this area. It was named by knez Milos, who passing through here and realizing that the Turks had burned everything down in the area said 'Nema ni kuce' (not a single house left), and that's what the place was named. The church in Nemenikuce is the place where Arsenije Carnojevic performed communion for the Serbs for the last time on this side of Sava river during the Great Migration. His brother Jovan stayed behind in this village and to this day everyone with the surname Jovanovic in this area are said to be his descendants.

The traces of a neolithic settlement (6-10 thousand years old) in Seca was discovered in 1964 by Dragomir Marici, an amateur archeologist.

Even though the area around Sopot is rich in ancient settlements, they aren't very prominent. What's known is that in Drvnik there was an ancient settlement where Roman coins from the 2nd century BC were found as well as a stone sarcophagus.

Also in Vrtace and the center of Sopot they excavated stone lions, urns, ceramics and the remains of sewers.

Up until the end of the 19th century, Sopot developed slowly without any rush. Still, seeing how it was located on the crossroads of many different paths, in 1842 it was assigned as the seat of Kosmaj srez. In the town there weren't many shop. A trader from Belgrade called Proka Nedeljkovic opened his store in 1857 and two years later Obrad Majstorovic made a store in his own home (this is where today the department store in Sopot is located).

Still it wasn't these few traders who were responsible for Sopot's town status given to it in 1893. The entire initiative was started by the traders Ljuba Nikolic, Obrad Majstorovic and Glisa Novicic, whose stores were threatened by the decision of the National Assembly to ban certain articles (many of which these three dealt in) from village stores.

They immediately came together and wrote an appeal. Alas, the srez council member Djordje Nedic in 1882 rejects them with the explanation that Sopot doesn't have the means to expand, seeing how it was located in a valley, so it couldn't grow into a town. The denizens of Sopot didn't give up and in 1891 they appealed again, adding the signatures of over 222 citizens. This time, two years later, they were rewarded with an approval.

Their new status contributed to many craftspeople and their apprentices moving to Sopot. The working class was already pretty strong in this town by the start of the 20th century and people organized into work societies and organizations.

The denizens of Kosmaj participated in all important wars. They participated in the Battle of Kosovo in 1389 and the stories say that Stojan Popovic brought 400 fighters to the battle while the duke Duca brought 80 horsemen. According to legend, it was right under Kosmaj that Ivan Kosancic was born, a famous Serbian hero from the battle of Kosovo.

In the 18th century, the denizens of Kosmaj in Turkish-Austrian wars sided with Austria. In the village Nemenikuce, the Serbian writer Milovan Vidakovic spent his childhood in wake of the commotion that drove his family to flee here from Kocina district.

During the First Serbian uprising, Kosmaj played an important role. In Drlupa on 11th February 1804, the first uprising rifle was pointed against the Turks when the notorious dahija Aganlija was wounded. Karadjordje and his uprisers burned down all the Turkish settlements in this area in Sibnica, Drlupa, Rogaca and Ducina. In the Second Serbian Uprising the denizens of Kosmaj participated in the fight alongside knez Milos Obrenovic.

They also participated in the Serbian-Turkish war between 1876 and 1878, then the Balkan wars in 1912 and 1913. In WWI, the people of Kosmaj had a significant role in battles in Cer and Kolubara in 1914. Then, in the area where today is the hotel and swimming pool Kosmaj, some of the most terrifying battles were fought, driving the enemy away to Sava and Danube.

During WWII, in the area of Kosmaj, the famous Kosmaj-Posavlje Partisan squad ran its operations and to this day there is a monument here, dedicated to their fallen fighters.

With its abundance of natural beauties, an excellent geographical position and genuinely good people, the Sopot of today is a beautiful place to live right under Kosmaj. Being 45km away from the center of Belgrade, many Belgraders often visit the forests of Guberevo, the picnic locations of Babe and the monastery of Tresije...

The hospitable and friendly people of this area are also one of its famous and beloved traits.

Municipality's day: 2nd July, the day that the Kosmaj partisan squad was founded