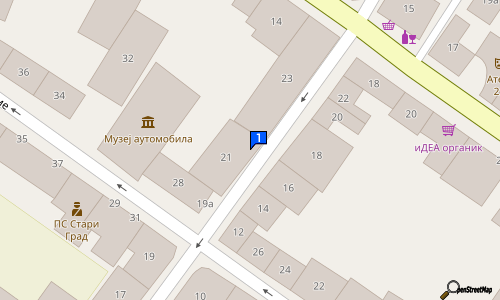 NEUROLOGY AND PSYCHIATRY FOUNDER AND OWNER Dr Veselin Pavicevic, Specialist in neurology and psychiatry (36 years), He has been the chief of ambulance in a policlinic of Neuro-psychiatry clinic and Institute for neurology of Clinic centre of Serbia. SUPREME DIAGNOSTICS Color doppler sonography for neck blood vessels, brain, arms and legs EEG (electro-encephalography) EMNG (electromioneurography) Magnetic resonance Angiogram (MRA) of brain and spine Computerized tomography (CT scan) of brain and spine Home rounds THE MOST MODERN TREATMENT of: Brain blood stream disorders (stroke, nausea, insecure walk, forgetfulness, speech difficulties, and double vision), headache, epilepsy, Parkinson’s disease, spine illnesses, polyneuropathies, psychosis, depressions and other neurosis, bedwetting in children DOCTOR;S OFFICE IS SPECIALISED IN TREATING OF NEUROLOGICAL COMPLICATIONS IN DIEBETIS (POLYNEUROPATHIES AND MICRO BLOOD CIRCULATION) DIABETIC POLYNEUROPATHY, THE MOST COMMON COMLICATION IN DIABETES IS NOW TREATABLE! What are the signs of diabetic polyneuropathy? Diabetic polyneuropathy appears because of the damaged blood vessels which feed nervous cells (microangiopathy). The first sign is usually oversensitiveness of legs to cold, especially while sleeping. Such patients have to sleep in sock, and in the cold periods (wintrers) they should put on two pairs of socks. Then there is the feeling of numbness in toes and feet, especially while the patient is still, sometimes it is of such intensity that it discomfits patient’s sleep. Often appearances of cramps in calves, that by rule appears at night. In later phase there ii pain in legs, that is sometimes too strong and it does not respond to the usual treatment. In neglected cases there are difficulties in walking caused by the weakness in legs, the patient can often trip over low obstacles on the ground, such as the carpet for example. Weakness can advantage to disfunction of certain nerves (the foot falls) or to the atrophy (drying) of muscles. Diabetic polyneuropathy can be easily diagnosed by correct neurological and electromioneurographic analyses that are being done in our office. Doctor’s office DOCTOR VESA was the first office that started with treating diabetic polyneuropathy with infusion (IV) of Alpha-lipoic acid (ALA) and later taking of this medicine in the form of pills. This kind of treatment was firstly used in Germany, and now it is used in all developed countries. Our experience is very good. So far there were no cases, no matter to the level of the disorder, where the symptoms were not reduced for at least 50 %, and in many cases the subjective hardships practically disappeared. We would like to mention that here we are talking about the cases were the disease was in its later phases, when it was not properly diagnosed or properly treated with so far known treatment methods. In milder cases the successfulness of treatment is almost 100%, with the fact that the further treatment with taking pills of alpha-lipoic acid on daily basis prevents reappearance of the disease. We specially emphasize the fact that this kind of treatment has no side effects, and significant successes are achieved in treating older patients.