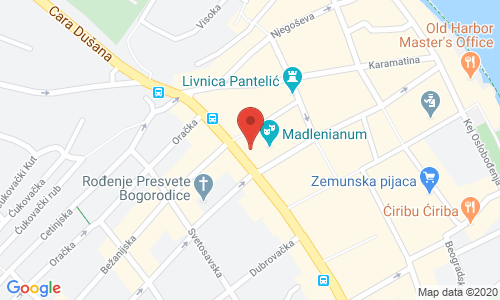 Rate this business
×
Report an error!
×

Opera and Theatre MADLENIANUM founded in 1997. as the first private opera in this part of Europe. Founder and donor MADLENIANUM Mrs. Madeleine Zepter, whose investment in culture and arts are the most modern patronage in this area, not only in our country but also in European terms, in general.
Madlenianum his loyal visitors on the occasion of the end of the season gives a discount of 50% for the hit show: • Comic opera mandragola • Musical Les Miserables • Drama - Cat on a Hot Tin Roof, WAIT FOR ME IN HEAVEN MY LOVE, Frida Kahlo. The number of tickets at a discount is limited! ____________________________________________________________________________ Cat on a Hot Tin Roof The most famous literary work of Tennessee Williams, famous for the Hollywood film from 1958. year with Paul Newman as briquettes and Liz Taylor as Maggie, from this season and the repertoire MADLENIANUM. This is a melodramatic tale of stumbling and true love that is revealed at the last minute. Cat on a Hot Tin Roof follows the couple Polit: Brik (Nenad Jezdić) and Maggie (Natasa Ninkovic) at a crucial moment for a rich American Southern family as soon as it learned that Brikov father, the old father-Polit (Miodrag Krivokapic) soon die. The play was made, directed by Ivana Vujic new hit MADLENIANUM for which the booked solid. Find out why ...
WAIT FOR ME IN THE SKY MY LOVE On the Small Stage Theatre Opera and Madlenianum, 25 April has performed the world premiere play written by Fernando Arabal that very poetic way to weave a love story of Gale and Salvador Dali. To the dramatic - a poetic way, in one hour and ten minutes in front of us takes a Dali\'s life, from childhood to death. His complete dedication to their art, fears, conflicts and misunderstandings due to environmental differences. The director of the Tanja Mandic - Rigonat, actress Dobrila Stojnic (Gala), set and costume designer Milena Jeftic Niceva Kostic, choreographer and ballet Andjelija Todorovic Zeljko Grozdanovic players, Danica Arapovic and Dusan Muric the team that realizes this performance. Of 25 April performance was in the regular repertoire Madlenianum.
Mandragola The old man and a young, beautiful women around you are spinning men after several years spent in marriage does not fail to have a child. Magic potion, called mandragola, solves the problems of sterility, by a young suitor and a beautiful married woman, combining her passion, pleases the old infertile man who yearns for a successor. This is a short comic opera Mandragola content which originated from part of Nicholas Machiavelli, the music Ivana Jevtic and directed by Slobodan Unkovski. After the world premiere in Madlenianum, this outstanding opera\'s regular repertoire Madlenianum.