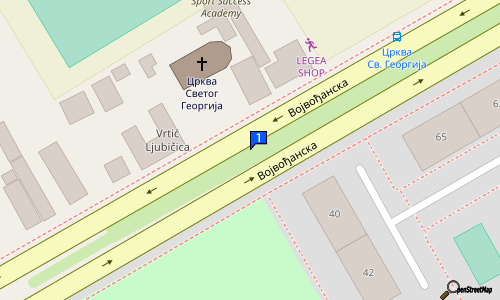 Like I was here Rate this business Report an error!

Bezanija was, probably, populated during the Turks, because, it is said that a certain Cortanovac priest Stefan was born in Bezanija in 1645. After the Karlovac peace (1699), the village stayed behind the Marckeline line, in Turkey, and belonged to the Belgrade archbishopric, and first after the Pozarevac peace (1718) was it given back to the Karlovac archbishopric. During 1728-1745, the village belonged to the count Senbor spahiluk, up to the military border 1745. On a map of Srem from 1730, the village Bezanija ? Verschanja, is marked. The temple was built in baroque style, and the original rood-screen was in 1938 replaced with a new one, the work of a Russian emigrant Andrej Bicenko. The steeple is located on the west side, and the cross on the top is the work of the tin-man Filip Valter, a German that lived here. The story says that Filip, after finishing the work, and toasting from the steeple roof, threw the glass to the ground, and it miraculously didn?t brake. In the beginning, the church had three bells, but they were used for war purposes by the Austro-ungars during WWI. After the war, the church municipality obtained two new bells, while the large bell was purchased with the parishioners? contributions.