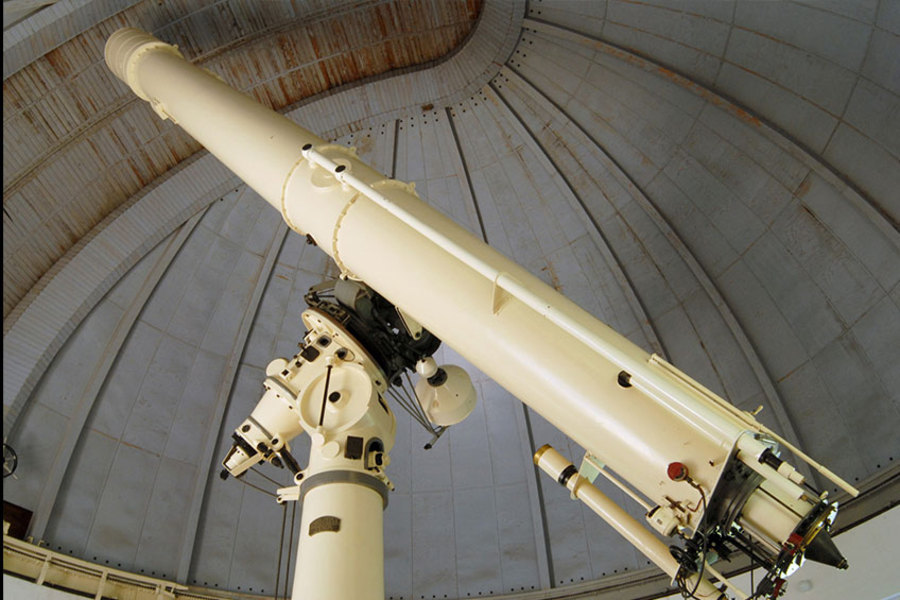 The history of Belgrade's sky - life of the astronomy observatory

The year is 1932. On the edge of Belgrade, behind Vracar, there is a hill known as Veliki Vracar, the large, mysterious, forested area which at the time belonged to the so-called “Fifth region” (third zone). On that day, however, a beautiful building appeared at the top of that hill, intended no more or less than for stargazing. If you lived in 1930s Belgrade, you were probably expecting this institution to open for a while and waiting for its picture to appear in the papers. The construction of the new seat of the observatory was followed and widely publicized in a time when scientists had a say in determining the development and the future of the capitol city.

The first “Zvedarnica” (Stargazery) survived until today and an entire urban settlement has formed around it, today known as Zvezdara. The history of Belgrade’s observatory reaches deeper into the past and is older than any man you know. It was started by one man who was born in the street then known as Kraljice Natalije street.

Milan Nedeljkovic returned to Belgrade in 1884 fresh, ambitious and full of knowledge after years of studying physics, astronomy, mathematics and meteorology in Paris and America. He then became a professor of astronomy in the Great School when he started doing all that he can in order to open the first astronomical observatory in his city. He was only 27 years old at the time. He succeeded in that intention around three years later when the Minister of Education of the Kingdom of Serbia issued a decree to found the astronomical and meteorological observatory as a unique institution. What an event! And we are not even out of the 19th century yet! Professor Nedeljkovic was assigned directorship over the project, which seems to be his life work. The budget for the observatory was so ridiculously small that the funds for its work and development frequently came out of Nedeljkovic’s own pocket. The first observatory building was constructed in Karadjordje’s park, where its meteorological department is still located today and young and curious minds of the Great School, future physicists, astronomers and meteorologists were educated. As meteorology had a much greater significance to Belgraders’ everyday lives, the astronomy part of the whole idea was always mildly overshadowed by it, but still benefited from the development and funding that its “partner”, meteorology, would get and continued to grow and develop alongside it, step by step. The scientific development is interrupted by – you guessed it – war. The devastation suffered throughout the Great War, which we know as WWI today, didn’t spare Nedeljkovic’s life work. The observatory was robbed, destroyed and its director ended up in the group which fled to Corfu across Albania.

I cannot hide the admiration I feel for the continuation of this story. Its protagonist returned to Serbia when the war was over and found desolation – moral, infrastructural and economic – but that did not stop him from completing the structure of his dreams. It is impossible to track down all the documentation that had to follow the incredible efforts to revive the observatory again. The funds, the strings pulled, countless meetings with various government officials and who knows how many other efforts have led to Nedeljkovic staying on as director until he retired in 1924, leaving behind a fully finished observatory.

Afterward, something unlikely happened – Nedeljkovic was replaced by an equally educated, equally ambitious and most importantly equally enthusiastic astronomer Vojislav Misovc. Under his directive, the observatory obtained the new building that we mentioned at the start, the first in Serbia and fourth in Europe with equipment funding amounting to 10 million dinars. This was a significant sum for year 1929 and it was not in vain – the Service for observing small planets and the Sun was formed which in the next years discovered a total of 33 asteroids, earning Belgrade’s observatory a significant place in the global astronomy circles. In the vacuum between two world wars, Serbian science blossoms and closely works with other European observatories. The “Zvezdani bilten” (Star bulletin) is published in French, but then another war breaks out. The offices are taken over by German occupation forces, the library is converted into a mess hall and certain workers are taken away to concentration camps. Years with no power and heating come and go and the remaining instruments which hadn’t been confiscated freeze over and become unusable. Still, Miskovic remains in his position and is allowed to take care of his “second home”. The observatory is damaged, but it survived.

It is interesting to look back and realize that astronomy in Belgrade had survived the world wars and then succumbed to the 90s. The years of poverty and cultural and scientific retardation did sadly not give us another Miskovic or Nedeljkovic, someone who would passionately try to preserve it with all their might. On the contrary, most scientists of that time left abroad in search of work, so for years the country remained without any professional staff who could work certain instruments. Luckily, we managed to crawl out of that swamp somewhat and “Zvezdarnica” slowly, little by little, got back on its feet. New projects have been started and bright young minds filled its offices. Still, the general poverty wasn’t the only obstacle in the observatory’s path. The hill that it is housed on quickly became engulfed by the city. New settlements grew rapidly and the stars above the observatory were flooded with light pollution. This is why today sadly only the sun can be studied and why Zvezdarnica today serves more as a central office than anything else.

Seeing how an observatory has to do its fair share of observing, some new buildings for astronomic observation were constructed in the much ‘darker’ side of Belgrade – the Vidojevica mountain. And much to the delight of us, enthused mortals, Belgrade’s astronomical complex is open to visitors, for free, every last Saturday of the month. You should certainly schedule your visit (which you can do via their Facebook page). You will be greeted by an open door and their professional guide. Don’t forget to inquire about the “BELISSIMA” project. It is basically a fairly spectacular telescope named “Milankovic” after a gentleman we’ve all heard of called Milutin, who led the observatory for several years. This telescope is operated over the internet, in real time, all for the purpose of discovering changing and “twin” stars and nearby galaxies. If those terms sound complicated, what about the fact that our “Zvedarnica” participates in international programs and searches for extra-solar planets, supernovas, galactic cores and gama ray flashes.

You can find the answers in Zvezdara, at number 7 Volgina street.