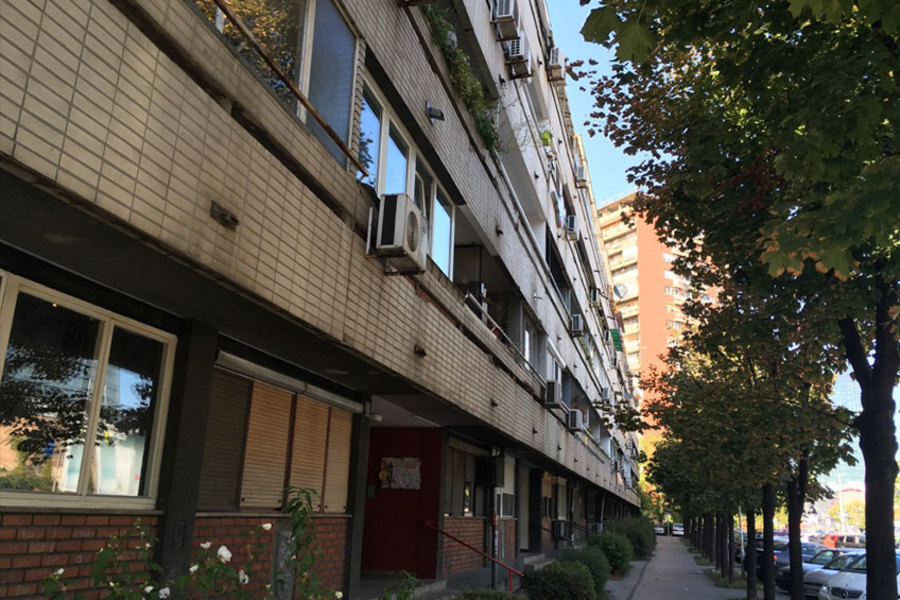 Like a wall which separates Westeros from the Far North in “Game of Thrones” in the New Belgrade’s Block 21 the “Meander” building boldly reaches up into the sky. This residential titan of over 1,000m height was lovingly named “Kineski zid” (the Great Wall of China) or “Lamela”. It has 62 entrances, 6,380 doors and 5,152 windows. Thanks to its shape – 9 wings which spread out in a zigzag shape which is how the building got its nickname, occupies a space in four boulevards – Mihaila Pupina, Zorana Djindjica, Milentija Popovica and Antifasisticke borbe.

This building is the proud holder of the title of the longest building in Belgrade and is a home to over 3,500 people.

The Meander building is the work of a project group called „Beogradskih pet“ (The Belgrade Five) who were active between 1954-1970 and which was led bz the famous architect Mihailo Canak. Throughout his career, Canak realized over 10,000 apartments. Alongside him, the team also included Leonid Lenarcic, Misa Mitic, Ivan Petrovic and Ivan Simovic.

At the time it was constructed in 1963, Meander was a major construction undertaking. The object which in the project was called „apartment block B-7“ was originally planned to be a project which will provide residence for military service personnel. Back then the late Canak had stated that the minimalistic demands of the investors were the greatest obstacle.

What ever effort I had made to make buildings recognizable was immediately systematically shot down with their demagogical creed: „For that money we could construct four more apartments. Your suggestions would deprive four families of a place to live. Imagine the poor children who wouldn't have a place to live because you want an extravagant facade!“. And so on. It was, therefore, a very pauper approach. On the other hand, the military was a bit more liberal in that regard because they were using government funding. They had much more resources at their disposal than the other investors, so they could afford some higher quality architecture. The others, however, especially thos who were already building the so-called 'market apartments' in the 80s were turned mostly towards profit, Canak stated.

This object was constructed near the “Sest kaplara” buildings which sort of “stand on guard” and the memorial park dedicated to Josip Broz Tito. Until 1992 this was the location where school manifestations such as Youth Day and 25th of May took place. The memorial park itself was erected in the period between 1980 and 1981 per initiative of the Mess council of the fighters’ union in Block 21, and after Broz died 88 trees were planted there – one for each year of his life. Right next to it there is an underground passage which many people use today to go towards the “Usce” palace. It’s the second passages of that type constructed in Belgrade, according to designs by the architect Milorad Pantovic in 1965.

The beautiful Orpheus sculpture made by the famous sculptor Milan Vergovic from Uzice used to decorate the schoolyard of the school formerly known as Josip Broz Tito. The school which was started by Jovanka Broz is today called “Jovan Ducic” and it had guarded the Orpheus since day one. However, in the 90s the sculpture suffered some vandalism which was why it was moved to the atrium.

For those who visit this object for the first, second or third time, finding the right entrance can be a real mini adventure. Seeing how it’s listed under four addresses, getting around is much easier if you know the exact location.

At first you might think that this building isn’t that impressive. When observed from nearby, you might even think that all these buildings are separate, that is until you take a stroll around the premises. The reason for this illusion is the sheer size of Meander whose magnificence can best be seen from a bird’s eye view. It’s from this angle that you can best comprehend the size of this residential building and the amount of work which went into its construction.

The lamellas of Meandro are intersected by parks, kindergartens, schools, shops, playgrounds and even a tennis court. All this makes the building seem like a town of sorts, lined by many cars struggling to find a parking spot.

The street name signs will return you to the age of proletarians and shock workers who, with cheer and song, built New Belgrade. You’ll be pulled back into reality by the numerous graffiti left behind by soccer fans or the sounds of car horns from the nearby street. The Belgrade’s “Chinese Wall” is a monument that withstands the decay of time.