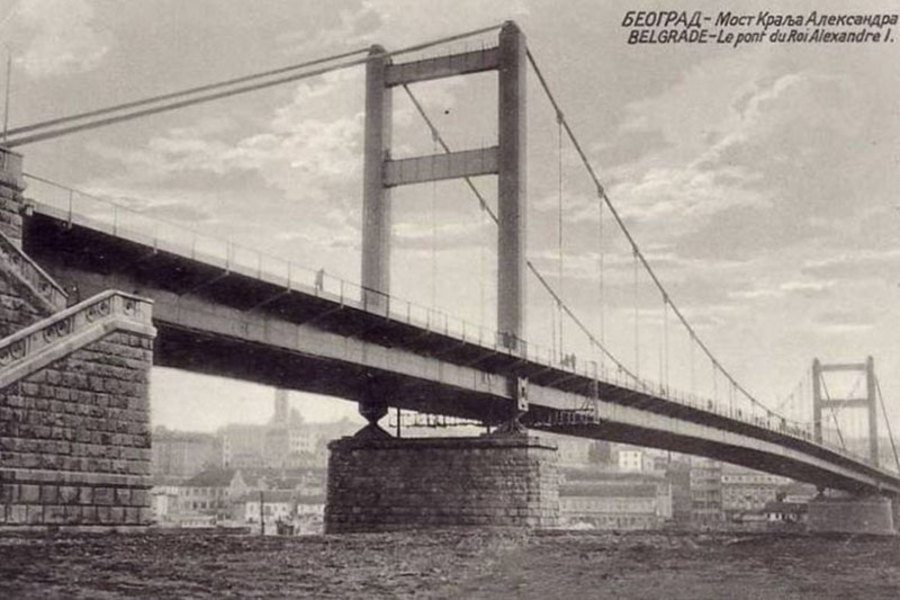 The bridges of Belgrade

The history of Belgrade resembles the bridges which adorn it. No matter how many of them there are, the residents will always want to build more.

The history of “White city” began a long time ago. It was founded by the Celts in the 3rd century B.C. Later this was the place where the Romans strolled, and then Slovenians who gave it the name it has today in 878. After that came the Austro-Hungarians, the Turks and many others...

All cultures that inhabited this region had one thing in common – to bring together the Pannonian plain and the Balkans. For two hands to reach across Danube and Sava and come together, joining shores, wishes, thoughts, love, humans, history and life itself.

The first bridge on the river Sava in Singidunum as the Latins called Belgrade is mentioned by historian Zosim in the 5th century. In the age of Byzantium there were numerous pontoon bridges across this river which continued during the Turkish reign.

What’s interesting is that the builders working for the Sultan Ahmed in 1595 were the first ones to bridge Danube near today’s Visnjica settlement. This is also the location where the armies led by Eugene Savoy in 1717 built a pontoon bridge which enabled them to conquer Belgrade.

A rich archive of historical documents speaks of various wooden and stone bridges that were constructed in Belgrade in the middle ages. However, in 1688 the Austro-Hungarians near Ostruznica constructed a bridge that was an unbelievable undertaking for that time across the river Sava. Immediately after, they also constructed a bride across Ada Ciganlija. This bridge was constructed by master builder Djordjevic in only a month, with the help of just 400 workers.

The painter of Balkan

Belgrade bridges have historically suffered from the same “ailment”. They were constructed on top of a proverbial “gunpowder barrel”.

The Railway Bridge with 6 stone columns was constructed in 1884 on the river Sava and had really poor luck. It was destroyed during WWI, re-constructed in 1919 and then blown up again in 1941. It was rebuilt again after WWII and got a partner – the New Railway Bridge which, incidentally, never got an official name nor did anyone ever try to give it one. The Old Railway Bridge was never painted throughout its lifetime. The reason for this – according to legend – is that the projectors of the bridge had forgotten to account for the weight of the paint while designing the bridge, which amounts to a few tons, and couldn’t apply that amount without endangering the stability of the bridge.

Today’s Brankov Bridge was first named the Bridge of King Aleksandar Karadjordjevic. Constructed in the Serbian-Byzantine style in 1934, it was the pride and joy of Belgrade back then. Alas, the German bombing in 1941 damaged it quite badly, while the American grenadiering in 1944 destroyed it completely. It was rebuilt in 1955 with the name of “Bratstva i Jedinstva” (Brotherhood and Unity) Bridge, but this name never caught on. People ended up naming it simply Branko’s Bridge, after the street of Branko Radicevic (the poet) whose street leads into it.

Another bridge with an interesting history is the Pancevac Bridge, originally named the Bridge of King Petar Karadjordjevic. It was constructed in 1935 and was actually the first real bridge across Danube. It was also abruptly destroyed during WWII and remained that way until 1946 when it was rebuilt under the name “Crvene Armije” (Red Army) Bridge. Again, this name is rarely used by everyday people. Most just call it “Pancevac”.

WWII didn’t just destroy bridges – some were also constructed during that time. In 1942 the Germans constructed the Old Sava Bridge which still supports Belgrade traffic today.

The bridge itself was constructed in Germany under the name “Prince Eugene”, with the intention of setting it up in Zablje. However, fate had other plans and the bridge ended up in Belgrade.

The Germans planned to destroy this bridge when they retreated from Belgrade, but once again fate – or should we say, a teacher from Belgrade called Miladin Zaric – intervened.

During the war, Zaric lived in his apartment in Karadjordjeva street, right next to the bridge. When in October 1944 the battle for Belgrade’s liberation intensified, the teacher saw some German soldiers placing explosives on the bridge – the then only connection between Belgrade and Srem. If the bridge were destroyed, that would’ve given Germans an immense head start during their retreat. Zaric didn’t hesitate. When the Soviet army was upon Belgrade, Zaric contacted the Red Army and climbed onto the bridge with a group of soldiers. Then, using the shovel that belonged to a deceased German soldier, he cut the detonation line and saved the bridge.

In a stroke of luck for the bridge, when the Germans realized they failed to detonate it and attempted to bombard it from afar, they missed their target and the bridge was left standing for future generations.

The bridges of the new age

The uniquely named bridge “Gazelle” owes its name to its appearance, whose lines resemble this graceful African animal in motion. This bridge was opened for traffic in 1970. As it would be the most heavily trafficked bridge, it was thoroughly tested before it open, by running a fleet of military trucks loaded with gravel and transporters for ballistic rockets over it. This test proved the stability of this bridge which you can’t avoid crossing if you’re in Belgrade for longer than two days.

We should also mention the bridge in Ostruznica which brought much needed relief to the city’s overcrowded cargo traffic as well as the Obrenovac-Surcin bridge which is a part of the new Srem’s Gazelle.

Also in December 2014 Belgrade became richer for another bridge – Pupin’s Bridge between Zemun and Borca. One unattractive characteristic of this titan which is 1,5km long and 29m long is its incomplete pedestrian line. On both sides of the bridge this line ends abruptly so that pedestrians and cyclers would have to go out into the traffic line if they wanted to continue.

To finish off our story about Belgrade bridges we have our latest, magnificent Bridge in Ada. This new symbol of Serbia’s capitol is a record-breaker which even has its own episode on the Discovery Channel. It is the first hanging bridge in the world that only has one pylon. The pilar is 198m tall and located in the middle of the river. In order to offset the instability problem which came up during design, the constructors made the two ‘forks’ of the bridge be different lengths (the shorter part is made of concrete and the longer part made of steel) which created the perfect balance.

What’s also interesting is that Ada Bridge is the third bridge in the world in supporting cable length. The incredible length of these cables is 1,000km.