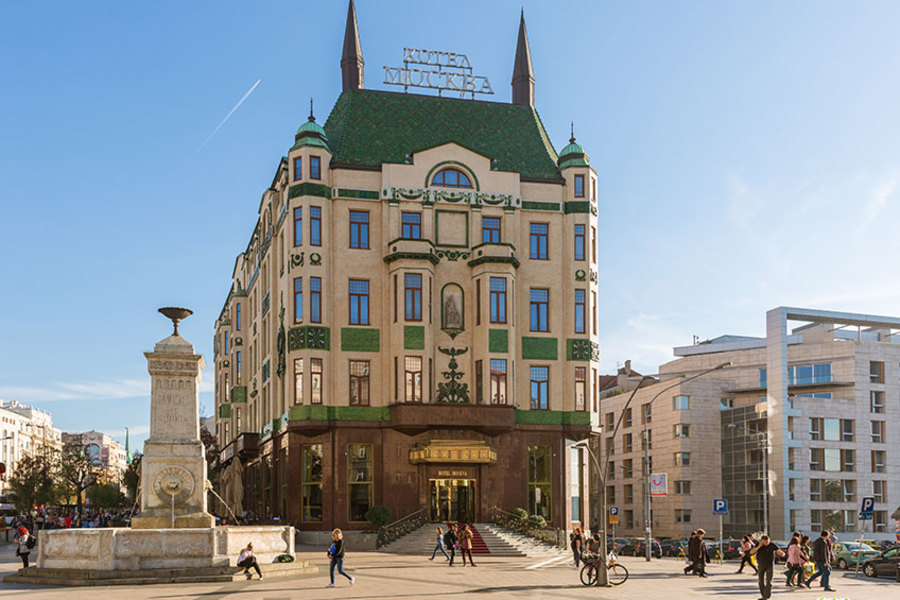 The slopes of Terazije: forgotten dreams of Paris in Belgrade

A Belgrader’s love for their city doesn’t count if they haven’t at least one wracked their brains trying to imagine “what would our city look like if it had never been destroyed?”

It would take too long to list all the wars, battles and bombings that Belgrade had been through and say “but it spites history and still stands proudly...” First of all, this isn’t true. As much as we love to praise and love our city where we grew up or had our first kiss or went to school and found a new friend. On the inside, today’s walls and gardens of the city aren’t the shadow of what once was, but they are a shadow of what could’ve been.

Our story begins over 100 years ago. Back then, the area we live in belonged to the Kingdom of Serbia. It was ruled by the Obrenovic royal dynasty, which was overthrown by the Karadjordjevic family after a series of assassinations. They presided over – as Desanka Maksimovic aptly put it – ‘a land of farmers on the hill-ridden Balkans’.

Before anything else, there’s a matter of territory – Belgrade was located on the border with Austro-Hungary, which meant that the state didn’t go over the border of the Pannonia plane. On the other hand, we had the isolated rural citizenry, scattered around villages and small town. Literacy wasn’t widespread yet and many of them had never seen the world outside their settlement. Of 2,5 million residents, over 86% of them lived in the countryside.

However, in the last decade of the 19th and first decade of the 20th century, we had the first wave of intellectuals, writers and artists, mostly educated in royal academies in Vienna and Paris. Back then, Mihajlo Petrovic Alas, Jovan Cvijic, Djura Jaksic, Stevan Sremac, Nusic, Dis and Jova Zmaj were all alive and creating art. Many of them graduated from the Great school which at the time served as Belgrade University. The streets were paved with cobblestone and walked by ladies and gentlemen who were appropriately dressed in their city attires. You could hear a few birds, gentle murmurs and bells on horses, since the city traffic consisted of carriages. It wasn’t until 1905 that the first automobile came to Belgrade – a technology marvel of its age. A few decades later, the number of cars would rise greatly and drastically change the looks, sounds and smell of the streets. 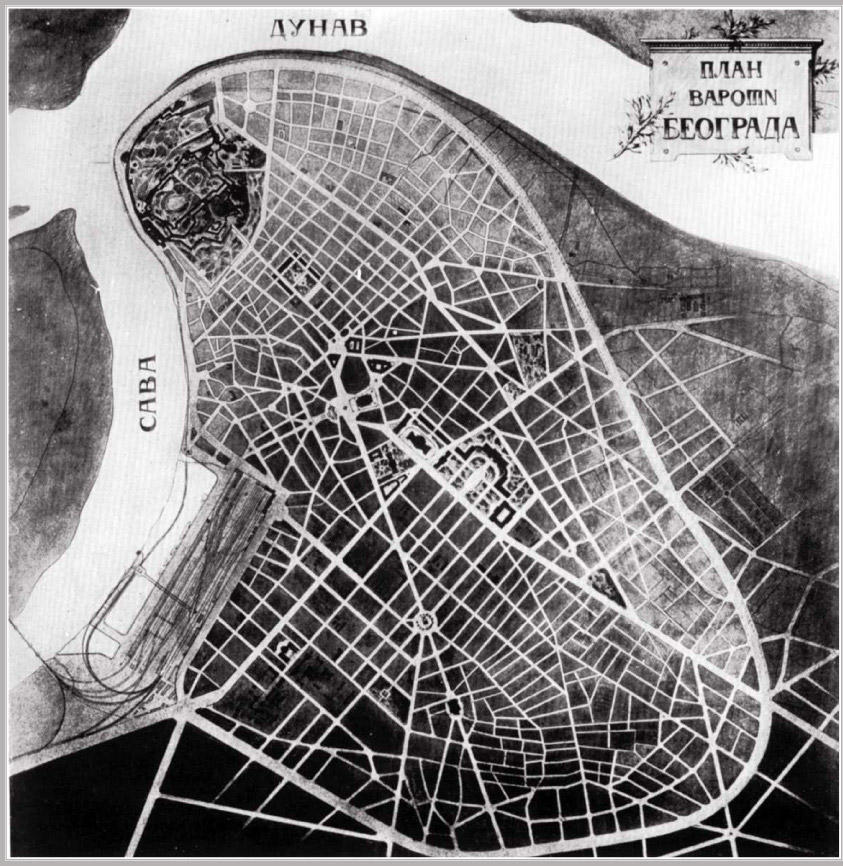 Today we know that those times had four big wars coming over a period less than 50 years. Knowing that, the start of the 20th century seems almost like a fairytale. In the desire to join the modern Europe, educate their people and modernize their capitol, the royal court and Belgrade council brought a Belgian architect Alban Chambon to Belgrade to design the center of the city and its immediate surroundings (today’s Slavia) to resemble the grand cities of Europe. Chambon had a grand vision.

This grand vision, however, was presented in a small chamber, much humbler than the London and Brussels exhibition spaces where Chambon would normally present his ideas. At that moment, the city whose urban plan he was designing was only a town with one or two squares, unprepared for the visions of one Alban Chambon.

The core of these ideas included Terazije, Slavija and Tasmajdan. The greatest challenge and obstacle was the uneven terrain of Belgrade, so the slope that ran from Terazije down towards the river (Terazije plateau) was imagined to be a sort of cascade fountain or a water slope. This surface which has presented a challenge for urbanists to this day – has been only recently resolved. The city post office still didn’t have a solution, so Chambon placed it at the location of today’s Albania Palac. Where today we have the Republic square, there used to be Theatre square where the National theatre building already existed. The building of the National museum served as funding management and the monument to prince Mihailo. For Knez Mihailova street we can also say it looked like it does today, minus the modern stores and some street performers. If you’re walking along Chambon’s plans from the direction of Kalemegdan, after “Knez” and the beautiful post-office building, you would reach a circular promenade lined with museums and directive buildings, intersected by streets so that it looks like the square Charle de Gaulle in Paris with the Triumphant Gate in the middle. Belgrade’s Triumphant Gate, on the other hand, should’ve been constructed in Slavia – “You Serbs are a warriors’ nation and this is a way to honour your fallen ancestors” were allegedly Chambon’s words on the topic.

Between these two wholes today we have the City hall building, which back in 1912 was the Royal court. Its surroundings were arranged to follow suit – in a pompous and lavish style, with a large Corinthian pillar that supports the monument to liberty. From there and towards Tasmajdan there would be a line of parks, gardens, museums and ministry buildings instead of today’s marketplace, cemeteries and the street vendors. Further, in Vracar, there is the gigantic Temple of St. Sava, stylistically miles away from where it is today. If you would go down the Maksima Gorkog street towards Juzni boulevard, you would find the circular boulevard – once Rejonska street – whose role was to divide the ‘urban city zone’ from the surface that was still under construction. 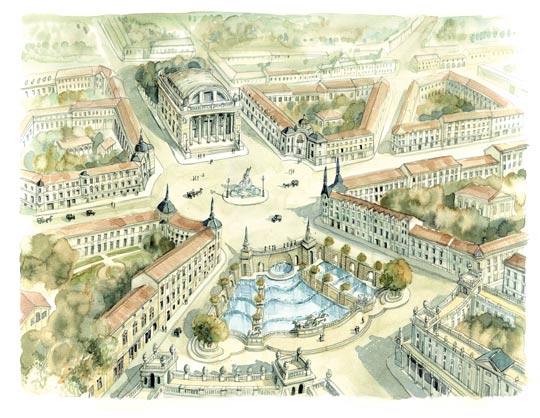 Why did it never happen?

To start with, it’s easiest to blame the wars. That same year the First and then the Second Balkan war broke out, then the Great War (which today we know as WWI). There was no money nor room for ambitious projects. But the wars had to end once, why did no one ever use Chambon’s blueprints?

Namely, grandiose plans were given hardly any attention. It was near-impossible to find them in the media. As Slobodan Gisa Bogunovic, the author of the Architecture encyclopedia of Belgrade put it, in the 19th and 20th century there was a great amount of resistance towards anything foreign in the Serbian congress. This was the time of Pasic’s Radicals and improving the capitol at the cost of not improving the provinces meant the threat of foreign culture to national culture, weakening of the national identity.

So in light of that, every kind of modernization was sabotaged – some times with more subtlety than others – and along with it also the slopes of Terazije and the Corinthian pillars. Sound familiar?

Therefore, the obstacles were logistic ones. At the location where the temple was planned there was still no sewers, street lighting or cobblestone. That meant that the entire area would’ve had to be urbanized in a short time and joined to urban Belgrade. Bringing together the wealthy and the poor, Paris and small-town, Gucca and Exit festivals as we’d say today, simply didn’t find an opportunity window. When it seemed like it might come, a new war was also emerging and the bundles of plans for a European Belgrade were left to be forgotten.