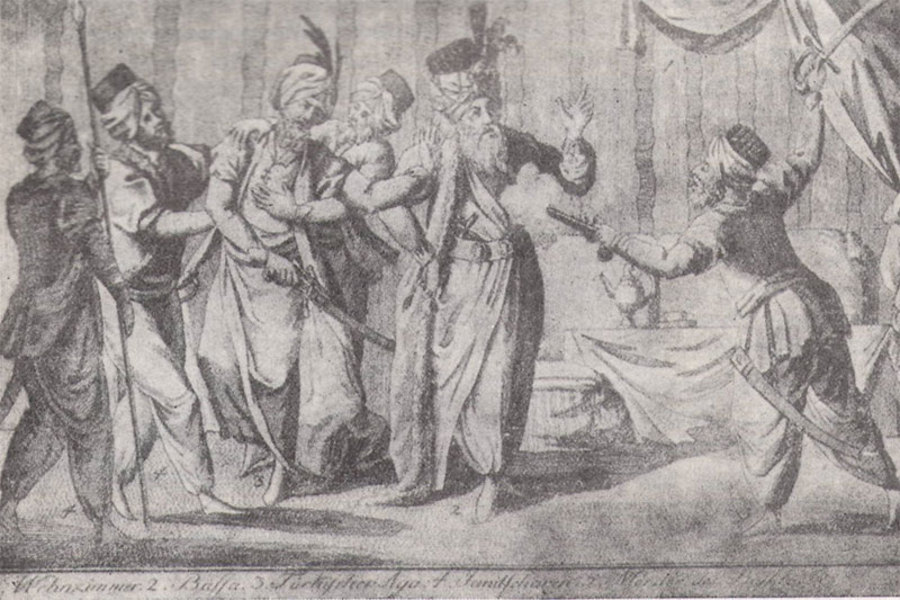 How the janissaries killed the mother of Serbs

Hadji Mustafa Sinik-oglu who was the vizier of Belgrade between 1893 to 1801 was the fiercest opponent of the janissaries and fought against their return to power in Belgrade and Constantinople. Namely, the janissaries were exiled after the reformation of the Turkish army, conducted by the sultan Selim III after the Svistovski peace in 1791 and they were desperate to come back to power. Sinik-glu was the main obstacle on that path.

It was in these complicated times, the story about the murder of "Serbia's mother" begins.

The Turk beloved by Serbs

Hadji Mustafa was remembered by Belgraders as a benevolent lord who had a good relationship with the Serbian townsfolk. This is why he was nicknamed "Serbian mother" by the people.

Still, the real question is why a vizier would even want to earn the affection of Serbian people.

The answer lies with the janissaries who found their protection under the wing of Pazvan-oglu, the lord of Vidinski region and an opponent of the Sultan. The cunning Hadji Mustafa knew that Serbs were excellent warriors. They proved it to him by guarding the south border of Austria and fighting for it, performing even the most difficult tasks. Those same Serbs, after the Svistovski peace, began returning to their homes, so the vizier knew that they could be his strength in opposing the janissaries.

In order to get in Serbs' good graces, the vizier pulled all his strings in order to provide any kind of independence to the Belgrade region. With decrees issued between 1793 and 1976, Serbs got their autonomy under the following conditions:

- The land was divided into 12 sections, managed by the county lords "nahijas" who were governed by the knez in Belgrade
- The county lords were in charge of gathering taxes from Serbs
- The tax cost 15 groats per head
- The spahijas could only live in Belgrade.
- Turks were prohibited from violent behavior when traveling as well as from building homes
- The pashas could only keep up to 600 armed men
- Serbs could freely build churches and monasteries
- Serbs were permitted to organize a Serbian national military in order to defend their territories

The last condition was of vital importance for Belgrade's vizier. It meant that the Serbs could have an army which would, cooperating with the Turks of Constantinople, fight against the hated janissaries.

The vizier's policies led to increasingly more brutal assaults by the janissaries. Hadji-Mustafa was victorious at first. He even managed to besiege Vidin while Serbs guarded the borders, stopping the janissaries from progressing. The vizier was even named the beglerbeg of Rumelije. This is why on 8th of June 1797, he gathered up his harem and left Belgrade, leaving the Osman-pasha as his replacement.

With Hadji-Mustafa out of the city, the Turks became even bolder, to the point where they even murdered the oberknez Stanko Arambasic - the man who led Serbian volunteers. He was killed by the order of the Port and Osman-pasha on 21st September 1798 in Smederevo.

Things began to worsen even more after Hadji-Mustafa, because of his failure with Vidin, lost the favor of the Prota. He was restored to the position of Belgrade's pasha.

But Belgrade was no longer the same. Pazvan-oglu made peace with Constantinople and Hadji-Mustafa had to let him and the exiled janissaries return to Belgrade. What's more, he had to replace his military with their forces. This caused the first rebellion which Kara-Ismail, a janissary aga, stifled and thus became the real lord of Belgrade.

In the middle of dealing with the janissaries, Hadji-Mustafa made one cardinal mistake. He commanded that the Belgrade mitropolit Metodije be arrested and executed without any explanation to the Serbian people, even though he established that the mitropolit was financially aiding the Pazan-ogluo's efforts against the Sultan.

Hadji-Mustafa believed that Metodije - being from Greece - didn't have any supporters among the Serbs and that he could remove him without issues. But this only made Metodije a martyr in the eyes of the Christian world. This is not to mention that Pazvan-oglu himself wasn't an enemy to the Serbs, but rather was fair and just towards them, which he showed while managing the Timok area. This mistake on Hadji-Mustafa's part happened because he didn't take into account that the only reason that the Serbs were in the military under Pazvan-oglu as Greek's opponents was because they had to, and that Greece and Serbia were long-time friends otherwise, who shared the same religion.

This lapse of judgment led to the defeat of Hadji-Mustafa's military near Negotin, where he faced Pazvan-oglu's forces. This defeat was a direct consequence of the Serb's dislike for the Turks that made up the majority of Belgrade Pasha's military. The disagreements between the Turks and Serbs led to them facing off with each other before they reached Negotin, so Pasha's military was forced to retreat while the conflicts between Turks and Serbs began to spread.

Hadji-Mustafa then invites the janissary-aga and other leadres of the janissaries to ask if they oppose their emperor. When they replied no, pasha demanded that they turn over the ring-leaders Mula-Jusuf and Husein the flagbearer.

However, this duo had already escaped and gathered allies with whom they staged a rebellion against Belgrade's pasha only two days later. Still, the lord of Belgrade managed to capture the rebel leaders of the janissaries and lock them up in Nebojsa tower.

In order to save Mula-Jusuf and Husein, the janissaries sent a letter to Hadji-Mustafa. They declared that they are leaving Pazvan-ogly and placing themselves in Pasha's service, in exchange for the lives of their arrested comrades.

Pasha made a soft-hearted decision there. He pardoned the rebel leaders, declared peace and left the city walls in order to attend the massive festivities held in the honor of this event.

It was then that the janissaries struck hard. Surprised, pasha retreated to lower city, leaving gunpowder magazines and stockpiles in the hands of the rebels. This all happened on 12th of August 1801.

Over the next week, battles raged non-stop. Cannon and gun fire shook the city day and night. Pasha hoped help would come from the son of Dervish-beg who was on his way to Belgrade from Kladovo with 800 Turkish militia and 500 Serbs with him.

Knowing what was coming, the janissaries called in allies from around the country to join them. Seeing how they were homeless, many of them accepted the call and the fights became even more fierce. Just in the night between 16th and 17th August over 30 janissaries were killed, including Husein the flagbearer.

The janissaries realize that despite their best efforts they won't be able to breach into the lower city, so they pull a cunning move. They discover an old lagum that was only bricked in from the outside and leads to the center of the city. For two nights they dug their entrance, covering up their activity with attacks from the opposite end.

Early morning on 19th of August, the fighting was reaching its peak. Pasha withdrew all his forces to the opposite side of the passage. It was then that 300 janissaries passed through the lagum undetected. They won control over pasha's residence and other strategic points without any opposition.

By the time that Hadji-Mustafa realized what was happening, it was too late. He was forced to surrender and accept all the terms that janissaries set before him.

- To dismiss the army that defended him
- To remove Sali-aga, the captain-beg of Bosniaks
- To declare the janissaries as sole defenders
- To have a janissary by his side at all times and never do anything without their approval

Pasha accepted all of this to get away with his bare life. On top of everything else, Hadji-Mustafa had to send a letter to his son, Dervish-beg, telling him to disband his army because he isn't in danger. He also had to write to his son to come to Belgrade alone.

Dervish-beg didn't believe this, however. In order to build up his army more, he retreated to Smederevo, but when they heard of this move the janissaries immediately informed him that if he attacks, the first cannon fired against him will shoot his father's head.

Unable to do anything else, the beg retreated all the way down to Nis, hoping for help from Hafis-pasha.

During that time, around 3000 janissaries gathered in Belgrade. After the order of Focic-aga, they eliminated the divan-efendija and alai-beg with two brothers as bitter enemies, thus announcing the pasha's own death.

And so it happened on 27th December 1801, three janissaries - future dahijas - Kucuk Alija, Focic-aga and Mula Jusuf break into the pasha's residence, placed a sabre blade to his chest and asked him 'where's your treasure?'.

Hadji-Mustafa showed them the chests in his room and Kucuk-Alija immediately fired at him, killing him on the spot - after which they decapacitated him as well. The bloodied corpse of Hadji-Mustafa was then taken to the bathroom where it was left, ironically, until his formal funeral a few days later.

The janissaries then sent a message to Constantinople saying that Hadji-Mustafa had to be killed because he was an infidel who ruled poorly and preferred Serbs to Turks. This letter, under threat of death, had to be signed by everyone in Belgrade.

That is the story of the murder of the 'Serbian mother'.