The Zemun fort originates from as early as the middle ages and is located in Gardos. Unfortunately all that remains today from what was once a formidable fortification is its square citadel. In 1896 the “Millenium tower” was built here, today more commonly known as the “Sibinjanin Janko Tower”.
The first mentions of the fort by its name originate from the 9th century. By the end of the 10th century the fort is conquered by the First Crusade army. After that, over the course of the 12th century, the fort remains an important location for the Byzantian-Hungarian wars. According to the writes of Jovan Kinam, a Byzantian chronicler, Hungary conquered the Belgrade fort in 1127 and then used the stone obtained from demolishing it to build the Zemun settlement. The same stone was returned to its original place later, when Manojlo Komnin the First conquered and destroyed Zemun.
After that a period of conflict with the Ottoman ensued and both forts – the Belgrade and the Zemun fort – were again destroyed in 1397. In the following decades there were various changes in power in Zemun. First in 1411 the Hungarian king Zigmund gifted it to despot Stefan Lazarevic, then it was handed over to Djurdje Brankovic in 1441, then conquered by the Ottomans in their attack on Belgrade in 1521. During that attack the Ottomans also managed to conquer Zemun even though its defenders, led by Marko Skoblic, offered fierce resistance. Due to its war-filled history the fortification was in ruins already in the 18th century. 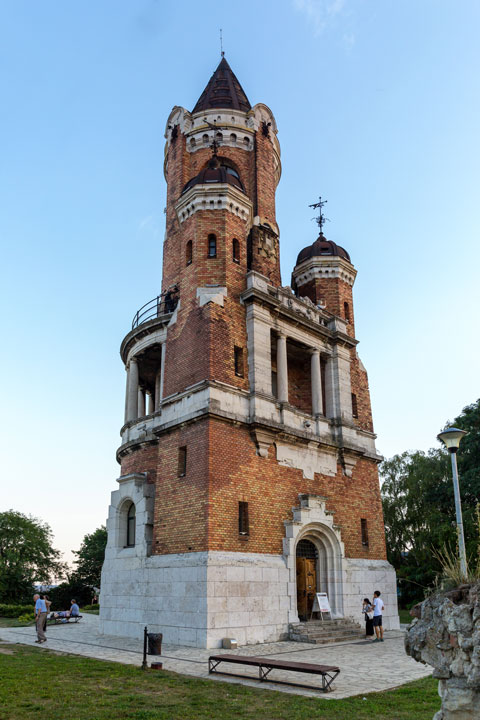 What remains of the fort today is only its citadel, located on the border of the large loess plateau above the Danube river. Only traces remain of the large, circular towers that used to stand on every of the four corners of the fort, along with a fragment of the defensive wall.
The Zemum “Millenium tower” that was built in the center of the fort’s ruins was designed by Hungarian architects using an ecklectic mixture of various historical elements out of which Romanian were most prominent. The construction was officially finished in 1896, on 5th of August while official opening ensued 15 days later, with a formal mass in all the churches in Zemun.
Regarding the story behind the Milenium Gardos tower, many link it to the events from the middle ages. More specifically, for Sibinjanin Janko whose name it shares today. The Hungarian hero and great fighter against the Ottoman rule, Janjos Hunjandi, passed away in this very tower, after he won a great victory. During the battle for Belgrade in 1496 Hunjandi led the Christian army and was better known among the people as “Sibinjanin Janko”. With his army he managed to break the blockade which the Turkish military had set up on Danube by linking its boats with chains to make sure help from the North can’t arrive. While the celebrations of his victory was still in progress he passed away from the plague in his fort in the Gardos tower.