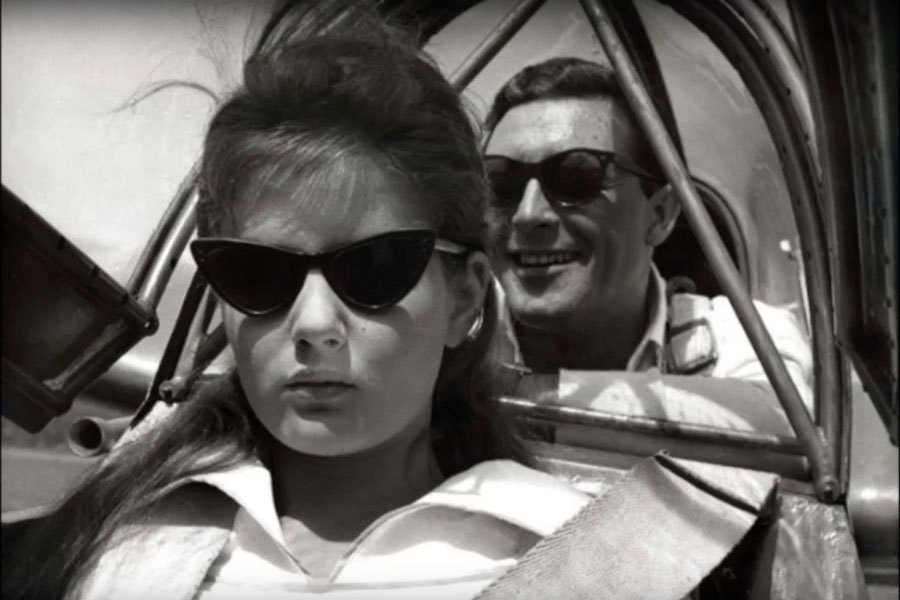 "Ko nekad u 8" when we listened to 'slager' songs

To set the mood, we need a song in the background:

We all know this song, and that means that it survived 57 years. One of the most famous ‘slager’ songs of its time was performed for the first time by Vlastimir Djuza Stojiljkovic for the needs of the movie he starred in – the legendary “Ljubav I moda”. It was later covered by Idoli and passed on to younger generations, while in Croatia there was a popular cover/translation by the group Kubizno who renamed the song to “Ninja bonita” (pretty girl).

Before Idols and Djuza and the authors of the song themselves – Darko Kljajic and Bozidar Timotijevic, Belgrade and Serbia was experiencing a flood of new entertainment music which had been unfamiliar to our region beforehand. With this new style of music came the first dances, slow dancing, whistles at 8PM. This wave reached us from our western-European neighborhood when upon the end of WWII there came the need for a new kind of entertainment, leaving the dark days of the war behind and moving ahead with the hope of love that awaits us tomorrow. Though for us in Serbian the term ‘slager’ maybe reminds of something sweet and light like ‘slag’ (whipped cream), the name for this type of music actually comes from the German “Schlager” which translated means ‘strike’ or as we know it in English ‘hit’, which is nowadays an accepted name for a popular song. Both German and Serbian versions of the name are applied to light, pleasant and catchy music that stays with us for a long time. In the 60s they experienced the height of their popularity and left behind a musical treasure trove of songs which today we enjoy with a mighty sense of nostalgia.

The birth of romance

In the year 1961 the first Serbian entertaining music festival was held under the name “Belgrade spring”. The principle of selecting participants was similar to a modern day festival – composers would send in their song to be judged by a professional jury who handpicked the participants who would then get votes from the public for their performances. Records, radio, television (soon in color as well!), dances, music videos – and the music industry was born.

There is a myth regarding covering (some say ‘stealing’) foreign hit songs, even faithfully translated to Serbian as a phenomenon of that time. It’s true that back in the day covering globally popular songs was a very popular practice in the music industry. Just like the melancholy ballads that tell a tale of the first love, the light in her eyes, holding hands in the rain – all these themes date back to the pre-war times but for obvious reasons there aren’t many records of them. The ‘anthem’ of that time that made it to our present is called “Mansarda, mali stan”, written by Sergei Strahov and performed over time by various artists. It announces the birth of the first dances which take place outside of special occasions such as graduation balls. By the middle of the century, music mostly included either folk songs or standard general music like the English waltz, tango and later even swing. War and after-war economic and cultural poverty turns young musicians and those feeling that way to creation, in which they mostly regarded American hits. Another strong musical influence that can be recognized in the music of that time was the festival in San Remo. At the same time they began printing the first lyrics booklets with the most popular modern ‘slagers’ and their notes.

The biggest celebrities of Yugoslavian entertainment music were Gabi Novak, Ivica Serfezi, Miso Kovac, Bisera Veletanlic, Miki Jevremovic, the unforgettable Djordje Marjanovic and many others who left a mark on the youth of many in the 60’s and 70’s. The rememberance of Marjanovic is owed to his greatest surviving hit song “Ko nekad u 8” but also his – for that time – incredibly bold performance that garnered him hordes of fans and critics alike. Young Djordje in the early 60’s did something completely incredible for the times – he took off his microphone from its stand, walked through the audience while singing, danced and in the end even took off his jacket and flung it into the audience. Bear in mind that in those days the ‘rowdiest’ that a singer would get would be snapping their fingers to the b eat of the music. The audience was entranced, hearts were melted and a new era of Yugoslavian music was born.