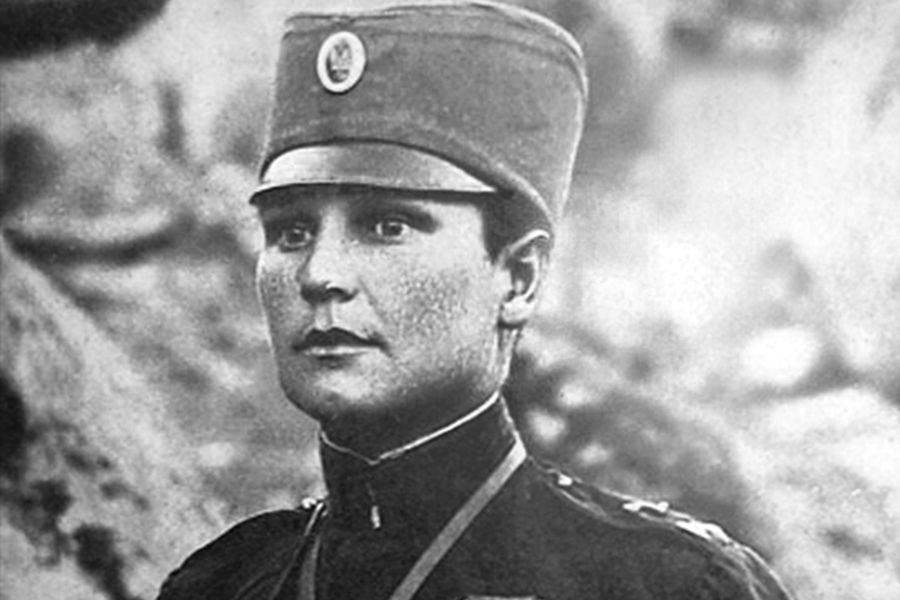 Milunka Savic: A great heroin of the Great War

Milunka Savic, whom many consider the Serbian equivalent of Joan of Arc is the most decorated woman in the history of warfare. She joined the army during the Balkan wars in 1912 as Milun Savic. Pretending to be a man, she protected her brother from being drafted. After getting shot in the Battle of Bregalnik in 1913 – the first of nine times this would happen – Milunka’s gender was discovered, but she wasn’t expelled from the service and fought in WWI under her real name.

Milunka was born in 1889 in the village Koprivnica near Raska. She was educated, spoke French and German and was commended globally for her achievements. However, in Serbia she was never much appreciated.

Even though one year after she joined the service it was discovered she was a woman, her courage during the Balkan wars got her the rank of Corporal. Then, when WWI came, Milunka was assigned to the famous “Iron squadron”, the most elite Second Squadron of the Serbian army, “Knjaz Mihailo”. She fought in many battles and for the heroism she displayed in the battle of Kolubara she recieved the “Milos Obilic” golden medal of courage. 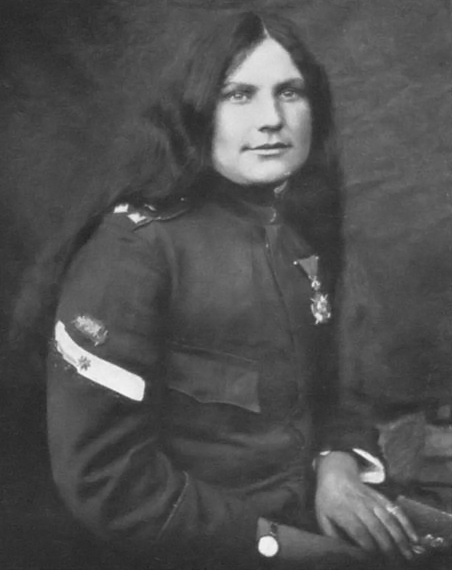 In the fall of 1915 in Macedonia, Milunka suffered heavy head injuries and retreated across Albania in that condition. After several months of treatment in Corfu, she returned to the Salonika front where she participated in battles throughout summer and fall of 1916.

For the courage she exhibited in battles during 1917, she was decorated by the crown prince Aleksandar Karadjordjevic, recieving the golden Karadjordje’s star with swords and soon after also the French military’s V degree Legion of honor Later she also received the French War Cross and the Officer’s Legion of honor. Milunka was the first woman in history to receive the French decoration War Cross. She was also decorated by the Memorial Liberation Wars medal from 1912 to 1913, the Albanian memorial as well as the Liberation and Union war memorial. She also recieved the British St. Michael’s medal as well as the Russian St. George the Victorious medal.

Milunka also received decorations unattainable by most soldiers for being an extremely precise bomber and charger – as well as Commander some time later. In the battle of Black river she captured 23 Bulgarian soldiers, but did not execute them because she always said she fought for life and not in order to kill the enemies.

This courageous and righteous woman drew admiration for the Allied forces whose armies did not include women. In 1918 the High command of all Entente armies gave a written commendation to the heroism of Milunka Savic. She also received praise from her friend Archibald Reiss, the Swiss forensics expert, Admiral Émile Paul Aimable Guépratte, the French army Commander and the mayor of Tunis as well as from General Franche d'Epérie, the Commander of the Salonika front. 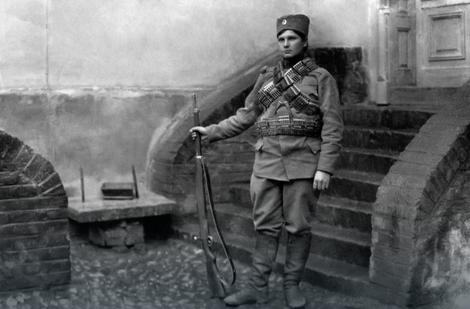 After the great war, Milunka Savic worked in Bosnia and Hertzegovina in different jobs – she was a cook, then a nurse, then a factory worker for military uniform control. In 1923 she married Veljko Gligorovic in Belgrade, having met him in Mostar where she was recommended for an honorary warden at the Mostar prison. She and Gligorovic had a daughter whom they named Milena. In addition to Milena, Milunka had three more daughters – Visnja, Radmila and Zorka – whom she adopted and raised on her own, seeing how marriage with Gligorovic was short lived. Thanks to help from her comrades she managed to find work as a cleaning lady in the “Hipotekarna” bank in 1929 where she spent most of her remaining working days. She was promoted later to clean the bank director’s office. Even though she never lived too comfortably, she managed to put around 30 more children from Koprivnica through school, in addition to her own daughters.

During WWII Milunka led a small hospital for wounded soldiers in Belgrade. Reportedly, in 1942 she rejected the invitation from the nationalist collaborator Milan Nedic to attend a banquet organized for German officers and generals.

After WWII she worked as a cleaning lady in the taverns of Belgrade. In 1945 she finally got her retirement pension and in 1972 she also received – per Peko Dapcevic’s instruction – a small apartment on the fourth floor of a building that didn’t have an elevator. She died in this apartment the very next year, at the age of 84. Even though it was announced that Milunka Savic would be buried in the Hall of the Great, this didn’t happen. She was buried in her family’s grave in the New Cemetary.

Seeing how no historians ever wrote her biography, Milunka Savic was rarely mentioned in history books and for a long time her name was absent from Serbian museums. There was only one monument erected in her honor, in Josanicka spa. 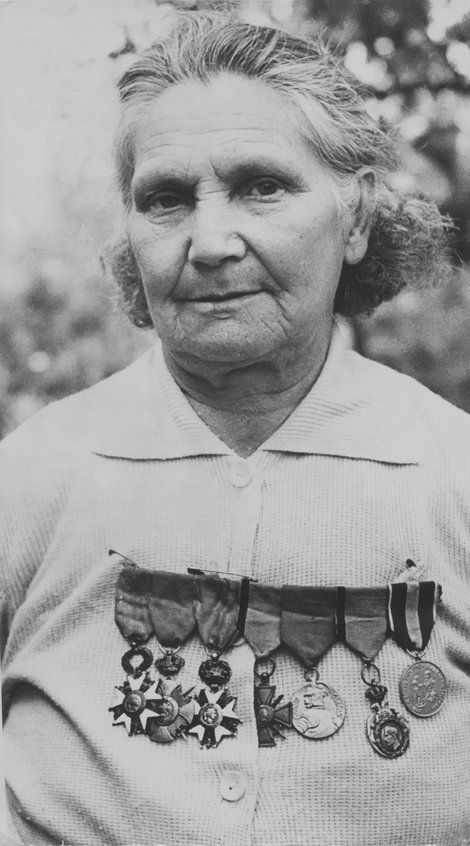 The French, on the other hand, had a much greater appreciation for Milunka. In 2011, in a museum that was opened with the idea to preserve the memory of WWI heroes, Milunka’s picture and medals were displayed and she was called the Serbian Joan of Arc. Soon afterward the Serbian society began to recognize the greatness of this brave woman and began to slowly right the decades of wrong done against her. In 2012 RTS aired a story about Milunka Savic in the show “Kvadratura kruga” and the next year it produced and aired the documentary “Milunka Savic – the heroine of the Great war”. This movie was filmed for the 40 years of her death and resulted in Milunka finding her rightful resting place in the Hall of the Great where she belong. In the meantime her birth home was renovated and last year housed the first ever “Days of Milunka Savic”. Also, the Belgrade street in which Milunka used to live is now named after her.

Milunka Savic wasn’t the only woman volunteer in the Balkans in WWI. There were around 20 more both from Serbia and from other countries – the neighboring Slovenia, Macedonia, Montenegro, Greece, but also from England, Austria, Switzerland, Holland and even America. Most of them were nurses, but there were some female soldiers like Milunka, which was revolutionary for that time. The Englishwoman Flora Sanders was Milunka’s comrade in the “Iron squad” and in the Salonika front she was a prominent Commander in the Gorniceva and Kajmakcalan front. The “Montenegro Fairy” Vasilija Vukotic, the daughter of Janko Vukotic was the only woman who fought in the Mojkovac battle. In the war our famous painter Nadezda Petrovic also assisted our troops, working as a nurse.

All these women, regardless of their roles, were sadly forgotten – we only remember them once in a while when we happen to see a play or a documentary that mentions them in some obscure channel during a less popular timeslot. All these women were forgotten by the society in whose wars they invested incredible efforts.