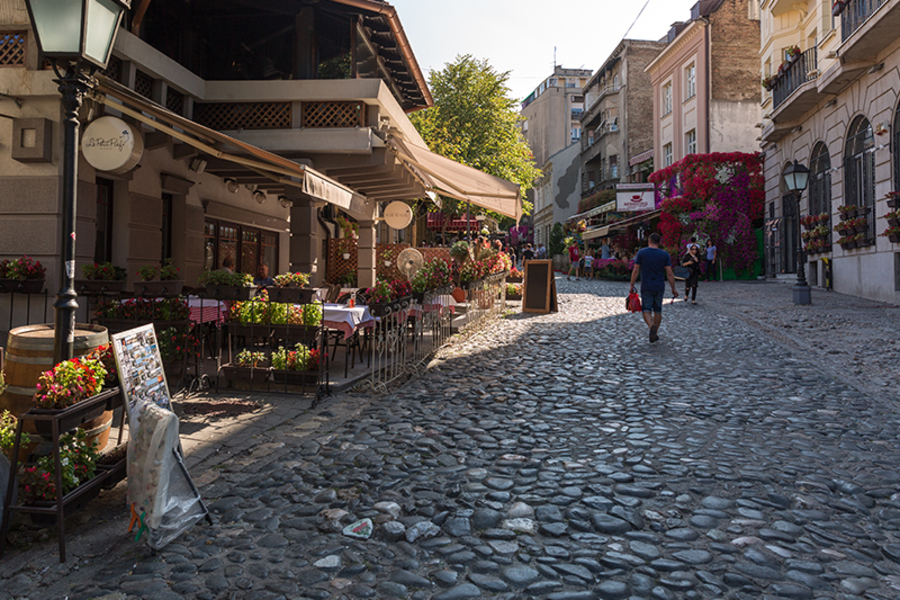 Belgrade's Skadarlija - from a bohemian quarter to an ethnic-style attraction

Skadarlija. It is a curving street which exudes the spirit of old times and the piled up footsteps of bohemians, actors and poets who are drinking deep into the night still echo down the cobblestones of the centuries-old Belgrade. Skadarska street, lined with once-famous taverns, remains a trademark symbol of the city on the confluence of two rivers. A small treasury of dreams which 20,000 people pass through every day, it is an unavoidable destination for every visitor who would like to indulge in the flavors of ages past and turn back the clock just a little.

However, the legend of Skadarlija owes its immense role in Belgrade’s history to a modest beginning, some chance and the city’s industrial growth.

The first Belgrader and the beginning of a legend

The first “udzerice” in Skadarlija came into being around 1717. Around the middle of 19th century, this area was known under the name “Shican-mala”, a Romani mahala with around 14 houses and got its today’s name “Skadarska street” in 1872.

At the time the so-called Bibi’s stream used to course down the steep, narrow street. Its source was located next to the Politika building (an old house of journalism in Belgrade) and was name after the Roman salvation divinity Bibi. This stream is today re-directed into the city sewers. The street was also connected to an aqueduct whose biggest arch was named after the “Skadar” city, which later became the name of the street.

An interesting piece of information dates back to 1892 when the famouse “Bajloni brewery” was being constructed in the location of the former “Mala pivara”. When digging out the foundations, the builders discovered the skull of Homo primagenius who was immediately lovingly named “the first Belgrader”. Sadly all trace of him became lost during WWI (or the Great War, as it was known in that time).

The first taverns also began to pop up around this brewery. The Guide through Belgrade from 1909 states that there were up to 14 taverns in Skadarska street, in a city with then only 90,000 people (as opposed to today’s 2 million). It was in that period that the famous bohemian sanctuaries “Bums keler”, “Vuk Karadzic” and “Zlatan bokal” began work. Our famous poet Djora Jaksic was known to practically never leave the “Bokal”. Other popular locations were “Milos Obilic”, “Bandist” and “Bumsov podrum” which was then frequented by Tin Ujevic. This gentleman was even dubbed ‘the King of Skadarlija”. “Filipova pivara” was also regularly frequented by the unbeatable Bora Stankovic.

The other famous taverns which remain from those days include “Tri sesira” and “Dva jelena”.

Skadarlija is probably the only Belgrade street which resisted Belgrade’s various winds of time. It changed its name only once in history, during the Austro-Hungarian occupation of Belgrade in WWI, when it was named Ruzina street. However, immediately after Belgrade’s liberation the old name was restored.

How Skadarlija became the center of social life in Belgrade

By the end of the 19th century there was a tavern called “Pasonin bulevar” at the entrance to Skadarlija. In addition to its large garden, it also had a huge hall for dances and weddings which represented the first Belgrade music hall. Around 1908 this spot had the honor of hosting the Belgrade’s Opera performances and after it stopped working in 1928, that spot became home to the Balkan cinema.

The title of “bohemian quarter” which Skadarlija obtained before the Great War was mostly the result of many great historical figures of that time who lived in this street or nearby. Among them there were the distinguished literary minds such as: Djura Jaksic, Jovan Jovanovic Zmaj, Antun Goustav Matos, Bora Stankovic, Branislav Nusic, Dragomir Brzak, the brothers Vojislav and Zarko Ilic. Skadarlija then was also home to actors Milorad Gavrilovic, Cica Ilija Stanojevic, Dobrica Milutinovic, Milka Grgureva, Zanka Stokic and many others.

Namely, after 1869, when the nearby National theatre began work, artists needed a place to stay. Skadarlija was the ideal solution. Of course, anywhere you find artists you will find entertainment, restless nights and songs until the early morning hours.

Little by little, Skadarlija became the gathering place for political, sports, arts, journalism and any other type of elite and the taverns became the places of life. The taverns were the internet of that age. The hub of all rumors, gossips, ideas and agreement. The place where anecdotes were told, art was created and important state decisions were made.

This is how a legend was born. 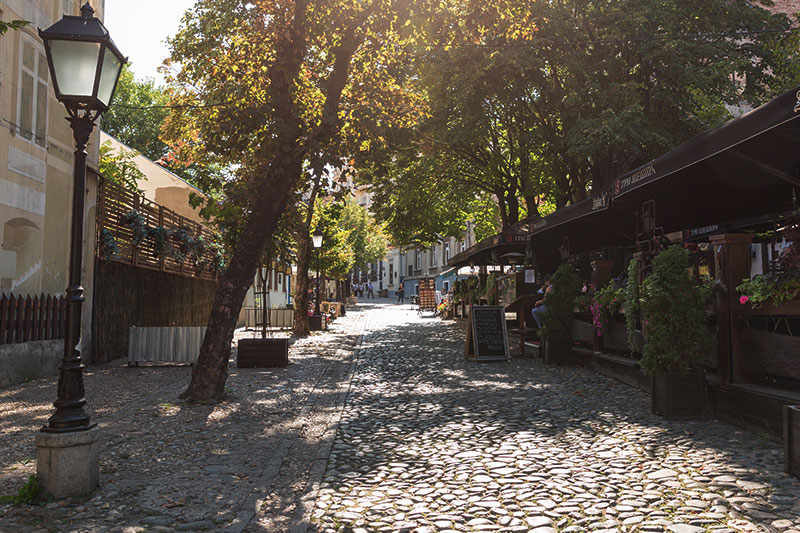 Using the project of the architect Ugljesa Bogunovic, the reconstruction of Skadarlija began in 1966. The goal was to revive tradition but in a modern way. The street was declared a pedestrian zone, cobblestones and lanterns were restored and taverns were re-opened.

This is how this old little poem gained meaning again:

when the hours are late

you go down Skadarlija

and your neck will break!” 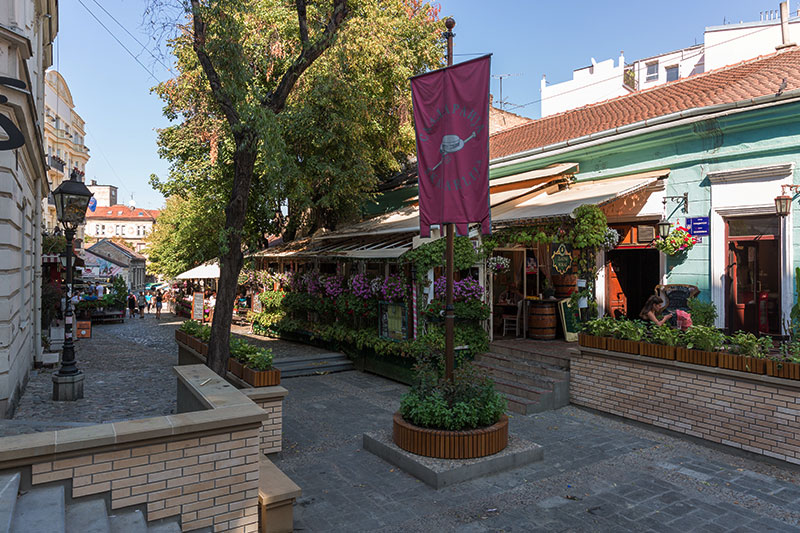 When entering Skadarlija, in addition to the flag with its marking (Gerard hat, black cane and red carnation), there is a large sign with its well-meaning message: “Skadarlija – the center of artistic bohemia holds the tradition of creativity for a full century. This is why, dear visitor, when you come to this corner of Belgrade to divert yourself, try to imagine just a little in your thoughts the ages long past. Remember all those generations of poets, artists, journalists and painters, bohemians known and unknown...”

So, as the sign advises, when you come to the Bohemian quarter of Belgrade, remember the romance of old times and try to experience and enjoy it. Do not forget that its long-gone customers from old days also lived “their most beautiful days in the night”.