Belgrade in the 19th century: Serbian uprisings and the battle for independence. 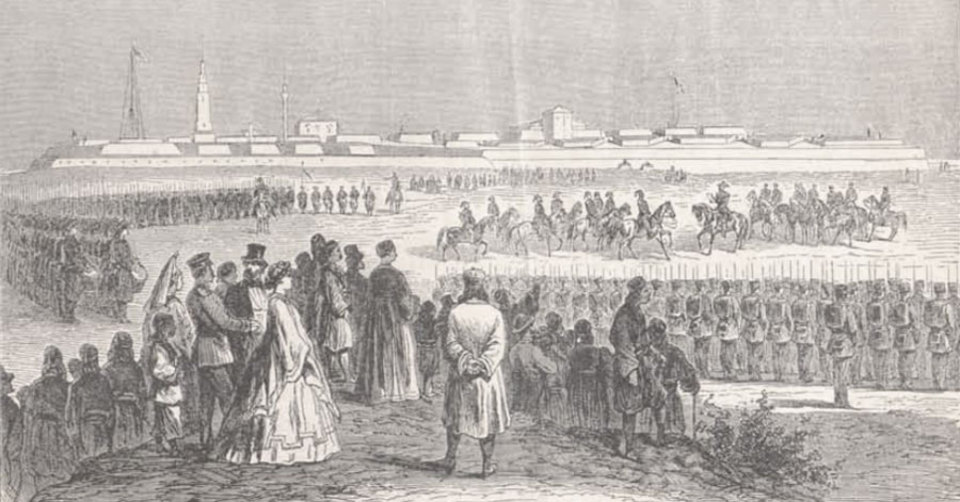 After the signing of Svistov peace treaty, the sultan Selim III banished the Janissaries from the Belgrade territory. Unhappy with this decision, the Janissaries joined Osman Pazvanoglu who had renegaded from the Sultan’s rule and independently ruled the Vidin territory. Secretly, Pazvangolu had plans to attempt to conquer Belgrade with the help of the Janissaries.

In order to stand up to the military might of the Janissaries, the Turkish powers relied on the assistance of Serbian fighters who were therefore allowed to bear arms and gained various privileges. Hadzi Mustaf Pasha ruled the Belgrade territory and because of his good relationship with the Serbian townsfolk, he was nicknamed „Serbian mother“. However, once Napoleon assaulted Egypt, Turkey was forced to withdraw from the Balkans and the sultan allowed the Janissaries to return to that territory.

Upon returning to Belgrade, four of the Janissaries leaders, Aganlija, Kucuk-Alija, Mula Jusuf and Focic Mehmed-Aga assassinated Hadzi Mustaf and gained control over Belgrade’s territory, subjecting the Serbian townsfolk to a horrific reign of terror. The discontented townsfolk had been planning an uprising against the Janissary leaders, but they found out about the plans by pure chance and tried to snuff it out before it began.

In order to intimidate the Serbian populace, the Janissaries executed most influential Serbs in the notorious event called “seca knezova” (the nobles execution), including Aleksa Nenadovic and Ilija Bircanin. However, this served only to enrage the Serbian people further. In a gathering in Orasac, on 14th of February 1804, the uprising was officially started, led by Karadjordje.

After two years of difficult fighting, the siege of Belgrade began. All the leaders of the uprising, led by Karadjordje, participated in this assault.

The main battle took place on 30th November 1806. The fighting lasted throughout the night and already in the morning Belgrade was in the hands of Serbian fighters. One of the leaders of the uprising, Vasa Carapic, was killed in the battle for Belgrade.

After its liberation, Belgrade once again became the capital city. The highest court founded in 1805 is moved from Smederevo to Belgrade and in 1811 split into the Ministry and the Great National court.

The rapid development of the city didn’t last for long. Already in 1809 the Turks begin to attack once again. After Russia was forced to retreat because of its struggle against Napoleon, the Turks re-took Belgrade on 25th September 1813 and the denizens of the city once again suffered a bloody retribution. The houses of Serbian leaders were raided and destroyed and the city is repopulated by Turkish people.

Turkish repressions led first to the Hadzi-Prodanov rebellion in 1814 and soon after that to the Second Serbian uprising in Takovo, led this time by knez Milos Obrenovic. The armed fighting during the Second Serbian uprising weren’t as intense as during the First. After four months of battles, an agreement was signed between the Marshalls of Ali-pasha and Milos Obrenovic that set the foundations for further diplomatic negotiations for Serbia’s independence. Knez Milos began bringing in more and more Serbs to populate Belgrade so the Turks living in the city sold their estates for fractions of the price. The city gradually became populated mostly by Serbs though the Turks still held the fort.

After Russia’s victory over Turkey and the Jedren peace, the Serbian issue was resolved. In 1830 in Belgrade the sultan’s hattisheriff regarding Serbia’s autonomy was read.

It was then that the city’s development truly began to take swing. Significant historical buildings such as kneginja Ljubica’s court, the Congregation church, the Topcider court are being built. Belgrade is becoming increasingly more important as a cultural center. In 1831 the first Belgrade printing house began work and four years later the first issue of “Novine srpske” the first Serbian newspaper, began to publish. The first post office, first high school and “Bogoslovija” begin their operations. The city experiences an influx of various great minds in Serbian culture such as Vuk Karadzic, Jovan Sterija Popovic, Joakim Vujic, Dimitrije Davidovic and many others.

During the first reign of Mihailo Obrenovic, Belgrade became the capital of Serbia in 1841.

The event at Cukur drinking fountain

In 1862, Belgrade had two police forces – Serbian and Turkish. The fort was still under Turkish control. In June that year, there was an incident at Cukur drinking fountain in which Turkish soldiers murdered a Serbian boy called Sava Petkovic.

This event incentivized serious armed fights within the city. The Turks retreated to their fort and from there bombarded the Serbian townscape. After an intervention from foreign forces, a truce was signed by Ilija Garasanin and Asir pasha.

It was then decided that the Turkish populace remaining in Belgrade should be moved out of Serbia. Over eight thousand Turks left the country over the course of the following year.

After five years of long-term negotiations and diplomatic struggles, in 1867 Ali-Riza pasha surrenders the keys to Belgrade to knez Mihailo. After 346 years, Turks finally leave Belgrade. The Belgrade fort is occupied by Serbian soldiers and alongside the Turkish one, the Serbian flag was flown at Kalemegdan.

The Turkish flag was removed from the Belgrade fort for good at the start of Serbian-Turkish war in 1876. Two years later, at the Congress in Berlin, Serbia’s independence was recognized and Belgrade became the capital of the Kingdom of Serbia.

This was a new boost for the economy and culture development of the city. In the second half of the 19th century, the city was modernized to European standards. The first phone lines were installed in 1883. Old trades were replaced by industry and the development of trade and traffic was greatly helped by the railway track Belgrade-Nis and the railway bridge on Sava constructed in 1884.

The first waterlines were put into use in the city in 1892 and already next year there was electric lighting in the streets. In 1894, the first electric tramway began its routes around the city. This was also the period when numerous important science and cultural institutions were built.

In short, Belgrade was rapidly preparing to greet the 20th century.