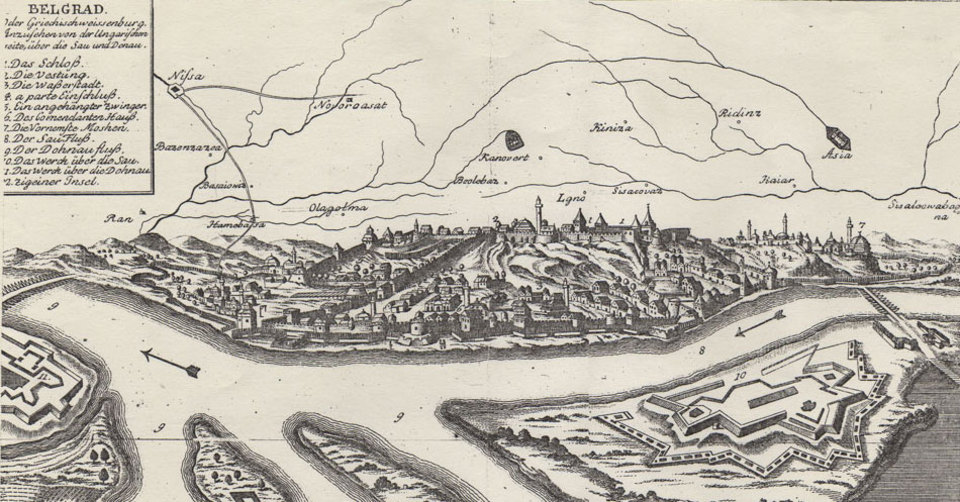 During the breach of numerous barbarian peoples to the Balkan peninsula between the 4th and 7th century, Singidunum was one of the most significant points on the border of Byzantine Empire towards central Europe. Just like many other surrounding fortifications on Danube, Singidunum was supposed to close the door to the Balkans for the barbarians and stop them from breaching deeper into the Byzantine Empire.

Because of its geographical position and strategic significance, this city was a stone in the path of many barbarian peoples who have attempted and many times even succeeded in conquering or destroying it.

Led by the legendary Attila the Hun, the Huns breached into the Balkans in 411 and destroyed everything in their path. Under the horrific onslaught of the Whip of God, Sirmium, Vimanicium, Margum, Naissus and also Singidunum all fell.

However, the Hun Empire quickly broke down after Attila’s death, so their territory ended up occupied by various other barbaric peoples.

In the second half of the 5th century, Ostrogoths and Gepids roamed the area of Singidunum. According to certain sources, even the Saramats ruled Singidunum at one point, after they took over the city by defeating a Byzantian military leader called Kamuda. One remaining Saramat dish uncovered in Belgrade is proof of their ancient presence in this area.

Significant archeological findings also tell a tale of the Ostrogoth rule of Singidunum. Namely in year 471 this tribe, led by their ruler Theodoric, conquers the city. However, their rule over Singidunum also didn’t last long. Fearing Theodoric as a potential enemy, Byzantine Emperor Xenon named him his consul in 484 and made him a king not four years later. As his mandate, Xenon sent Theodoric to Italy to seize the power from Odoacer who brought down the West Roman Empire in 476. Theodoric did so and ended up founding the Gothic kingdom in Italy. Seeing how the Ostrogoths moved to the Apennine peninsula, Singidunum formally ended up back under Byzantine control, but it was neglected and worn down.

At the start of the 6th century, another Germanic tribe crosses the Danube and inhabits the surrounding area of Singidunum. It was the Heruli tribe, who were permitted by the Emperor Anastasius to settle there in order to defend Singidunum from the Gepids, another Germanic tribe who were on the warpath and whose state in Srem was quickly growing stronger. That’s how the Germanic tribes took over the broad territory of Singidunum in the first half of the 6th century. On the western side of Lower town, material traces of Germanic cultures were discovered.

Seeing how Singidunum was the target of many conquerors, over the years it suffered great destruction. According to the writings of court historian Procopius, the devastated Singidunum was re-built and re-fortified by the Emperor Justinian I in 535, making it a great and praise-worthy city. Then, on the eighth mile mark from Singidunum, the Castrum Ad Octavium was also constructed and its remains were found in the area of today’s Visnjica.

In the second half of the 6th century there have been significant ethnic changes around Singidunum. The disappearance of the Heruli as well as the destruction of the Gepid state in 567 under the joined forces of the Avarians and the Lombards were both significant events that prepared the field for the appearance of a new conqueror.

Byzantium temporarily took advantage of the infighting between the barbarians to restore the Danube border, but the Avarians and incoming Slavs were a new threat.

Having previously conquered Sirmium with the help of the Slavs and by doing so significantly threatened the inner line of Byzantine defense, the Avarian ‘Kagan’ Bajan also conquered Singidunum in 584.

Nine years later, Singidunum ended up back in Byzantine power after Emperor Maurice started an offensive against the Avarians and the Slavs. Kagan was loathe to give up this important fortification, so he continued to siege it over and over and ended up taking it back three years later. After finally destroying the walls of the city, Kagan intended to move away the local populace who resisted his attacks for so long. On the other end, Byzantium fought hard on their end to save their Danube border.

Maurice sent a river fleet and his distinguished military leader Priscus who managed to force the Avarians and Slavs to withdraw. Singidunum remains under Byzantine power and soon is rebuilt again.

However after Mauricius’ decade-long successful fight against the barbarians on Danube, there was a shift in power in Byzantium. After it got the order to spend the winter on the left side of Danube which was still controlled by the Avarians and Slavs, the Byzantine army rebelled against Mauricius who was soon killed. Taking advantage of that situation, the Slavs immediately breached and overran not only the Singidunum area but the entire Balkan Peninsula. Already during the first decade of King Heraclius’ rule – in year 614 – Salona was conquered and soon after other important cities.

At that time the Slavs also got hold of the city whose ancient name was mentioned in historical sources for the last time in 630 – Singidunum.