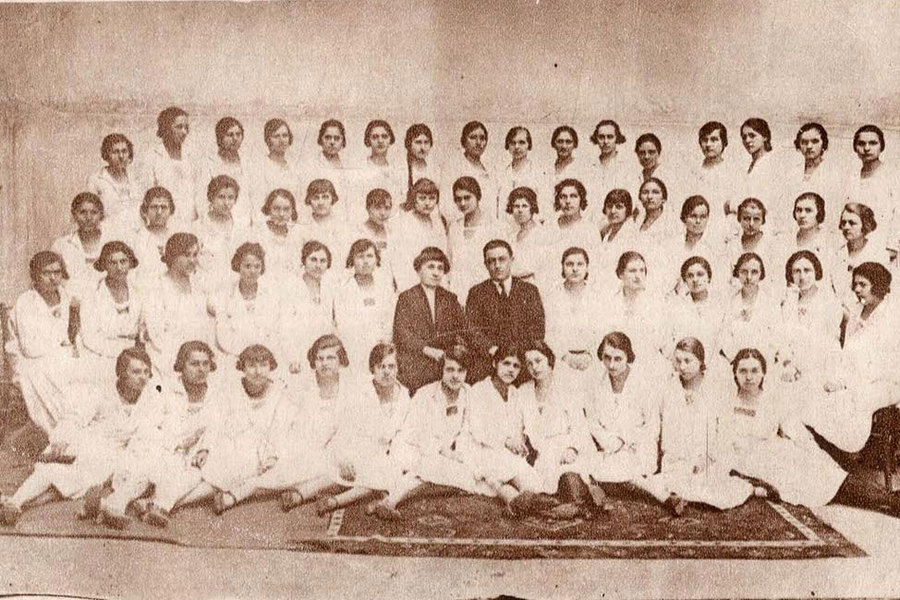 Send your daughter to school so she can learn to work - or, what you could learn in housekeeping schools

„The young girls these days are atrocious! They dress up for a runway just to go to school and those 'senfies' they hang in their computers nowadays? Every girl does those..."

And do you remember, Ethel, how we weren't allowed to peep a word in class? Let alone say something rude to the teacher, goodness gracious!"

These and many others are only some of the remarks that the older generation has for today's youth. Especially the young girls of today tend to get the short end of the stick, in the decades where strict patriarchy is still the standard.

This despite the fact that girls and women are and have been wearing the proverbial 'pants' for a long time now. Today they are doctors, scientists, owners and leaders of companies, athletes or respectable artists and much, much more. It's hard to imagine that there was once a time when women - unless they belonged to aristocracy - couldn't attend even basic education.

That is to say they could, but they were not the schools we know today. There weren't natural or social sciences, no sports or music. Just a hundred years ago, girls went to school to prepare for all the responsibilities they would have in everyday life: marriage, raising and educating their children and taking care of the house. They would be pillars of their household which can definitely be a daunting task.

Women could learn a lot about this from their mothers and grandmothers and for the longest time they were their only 'teachers'. And then in 1919, someone remembered to start a school for housewives.

That someone was the country itself - back then the Kingdom of Serbia. "For educating our female youth, we have started official schools for housewives", said the then newspaper articles. The idea of this undertaking was born after the state saw the need that the future wives study everything they need to do when they get married.

Therefore these schools for housewives had the task to enable the girls to housekeep, teach them how to clean up, maintain hygiene, cook and properly care for and educate their children. The girls also studied the "basics of human culture" so that in the society they live they could find and provide proof of an education that's actually useful.

For a society that believed that the 'woman belongs in the house', there was nothing controversial in this regard. Women back then were rarely academically educated and most of them came from a lower education status. All until by the end of the 30's they started the first girls' highschool. The girls now had to learn something different in the science department. How to manage a household, wash and strain clothing, sew and patch clothing. Tending to farm animals, beekeeping and pedagogy were also official classes taught in housekeeper schools. There were two requirements for becoming a student at this school - you had to be literate and aged between 16 and 30.

Housekeeping schools were at first state institutions - something like what we would today call classic state schools. Soon, however, it turned out that the growing need for educating housewives couldn't be met by the state alone. The solution came in opening private housekeeping schools. The first of which appeared in Zagreb and Maribor.

Thanks to Natalija Djurovic, a retired manager of the higher housekeeping school, the private schools for housewives also arrived to Belgrade. Madame Natalija already had years of experience educating housekeepers and her idea was adopted by the then Ministry of agriculture.

In addition to the Ministry, the decision was greeted by the members of Belgrade's high society at the time. That's how in the street of George Clemenceau (today known as Makedonska) the first private school for housekeepers began work. An institution of this type had special benefits - the girls could stay in the boarding school and their curriculums could last for three, five or ten months.

What's more, many girls who "need a proper knowledge of running a household and participating in society" now had the opportunity to attend the first private school led by an experienced professional in the domain. All in all, it was far from the education we know today. The question "which college should I go to" coming from a woman was unimaginable at the time.

Nobody usually had anything bad to say against the students and future housewives and that the usefulness of this kind of school is immeasurable spoke the analysts of the 'Vreme' newspaper. Though the patriarchy in our society today also has its place, the schools for housewives are thankfully a thing of the past. While the young ladies today go to school for much more intellectual pursuits, teaching us about housekeeping and the secrets of a harmonious marriage is once again in the hands of our dear mothers and grandmothers.