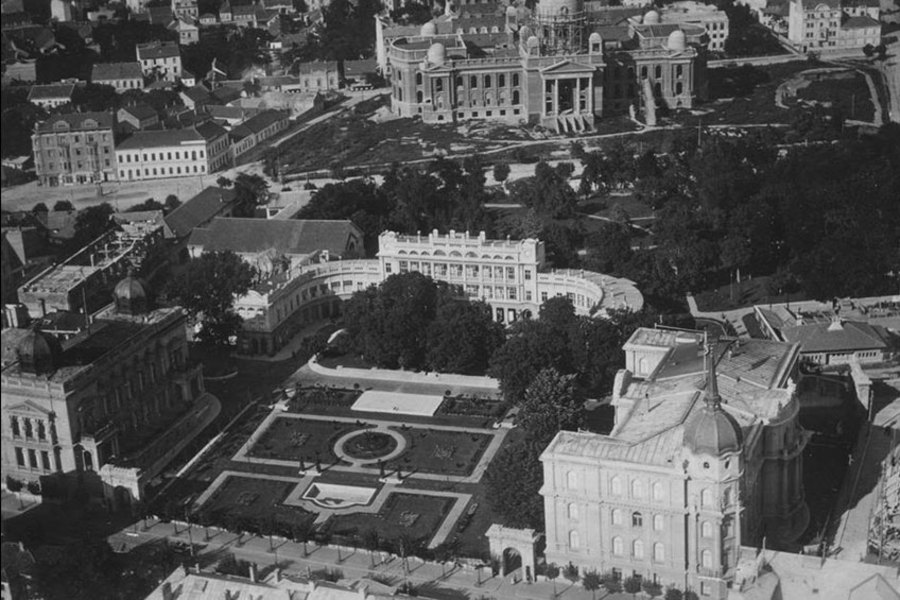 What today we call the City hall and the presidency of Serbia used to be the Royal court. A majestic structure surrounded by a garden, small lake, tulips and sculptures, while inside its walls there could be found a lavish world the likes of which we only saw in cartoons and then in field trips to Versailles or Sherburne.

The oldest member of this grandiose complex is the Old court, whose construction began at the start of 1881, as a residency for king Milan Obrenovic and his wife and son Natalija and Aleksandar. It was a castle the likes of which we might’ve imagined as children, when our parents read us fairy-tales: surrounded by an elaborate wrought iron fence encircling a beautiful garden with numerous statues, planters and pillars supporting romantic balconies, gilded window frames and fences on majestic staircases, glass entrance hall and ballroom with yellow walls and grand chandeliers made out of Venetian glass. The interior was furnished with stylish, elegant furniture in renaissance and rococo styles, the music pavilion, glassed out winter garden, gigantic library with over ten thousand different titles. What’s interesting was that the project was the work of Aleksandar Bugarski who also projected the National theatre. The yard had a small chapel which was obliterated in the onset of Communism. 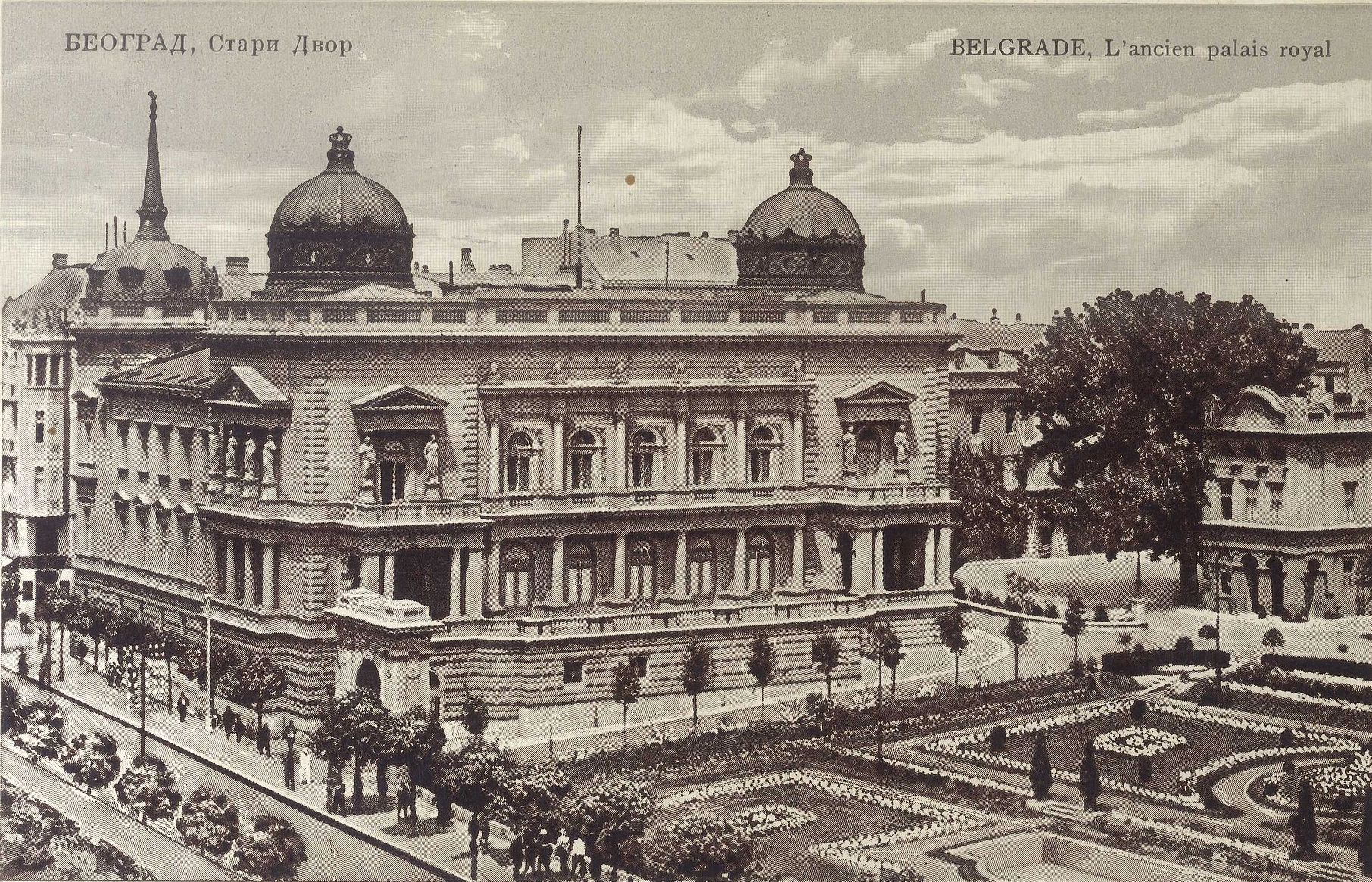 The ruins of May uprising

Alongside the court there used to exist the oldest part of the royal structure – the home of Stojan Simic, politician, trader and businessman of his age. He constructed it there in the 30’s of the 19th century, when the hill of Terazije was still far apart from the city bustle and then sold it to the royal family 13 years later.

Less pretentious and more comfortable, but just as luxurious as the Old court, the English-style villa was once the favored residence of Milan’s heir Aleksandar and his wife Draga. Ironically, this was precisely where King Aleksandar was assassinated in May 1903, even though the home of Stojan Simic was connected with the Russian embassy through underground passages. Cornered, Draga and Aleksandar couldn’t escape and were discovered hiding behind one of the secret doors in the bedroom, where they were shot. When the rival dynasty of Karadjordjevic took over power, the entire building was torn down to erase all memory of the tragic event.

That’s where we find the youngest part of the puzzle which for years later will nostalgically be refered to as "Versailles of Serbia". The New court, today the presidency of Serbia, was constructed in 1911 as the court of Petar I Karadjordjevic. Kind Petar, however, mostly resided in his villa in Senjak, while the court, with its 60-ish rooms remained an extravagant display of refined taste and power of the ruling dynasty. The dozens of rooms included three large, main halls, nine work cabinets, five bathrooms. However, the immense number of rooms isn’t our main interest at the moment. The interior design was entrusted to the best experts and the walls were decorated with the works of Cezanne, Van Gogh, Gaugin and later our national artists like Petar Lubarda, Sava Sumanovic, medieval frescos brought in from monasteries in Kosovo and Metohija dominated by images of Nemanjic dinasty. The artwork in the walls didn’t appear randomly. The setup was carefully designed to show off all the splendor of Serbian art history.

However, the New court also went through wars and uprising which left it damaged and deprived of many valuable works of art. After the assassination of king Aleksandar in 1934, the building officially became a museum. Even though the political role was restored to it in modern days, it’s also open for tourist visits. This means you have the opportunity to see what the building looks like after being used by several different governments, presidents, services and – technically – states. Which further implies it suffered a great many changes and not much of its original appearance remains. 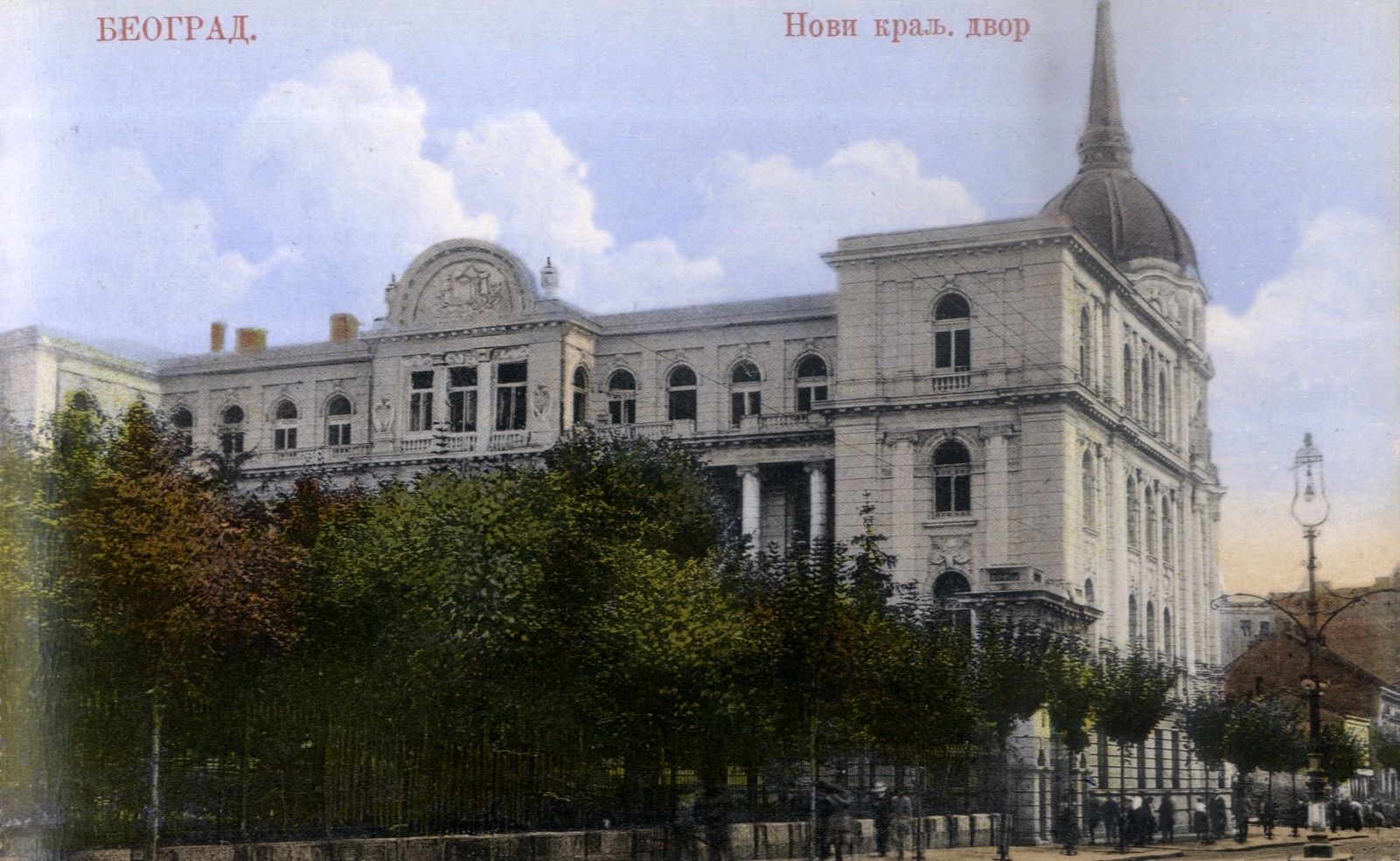 As far as the garden goes – it re-emerged a few years back, when between the old and new court a fountain was constructed much like the one that was there almost a century earlier. In the same manner flowers and a lawn with benches were planted, so today passersby can rest there while strolling down Slavia, as of recently with a view of the monument depicting the Russian Emperor Nikolai II.