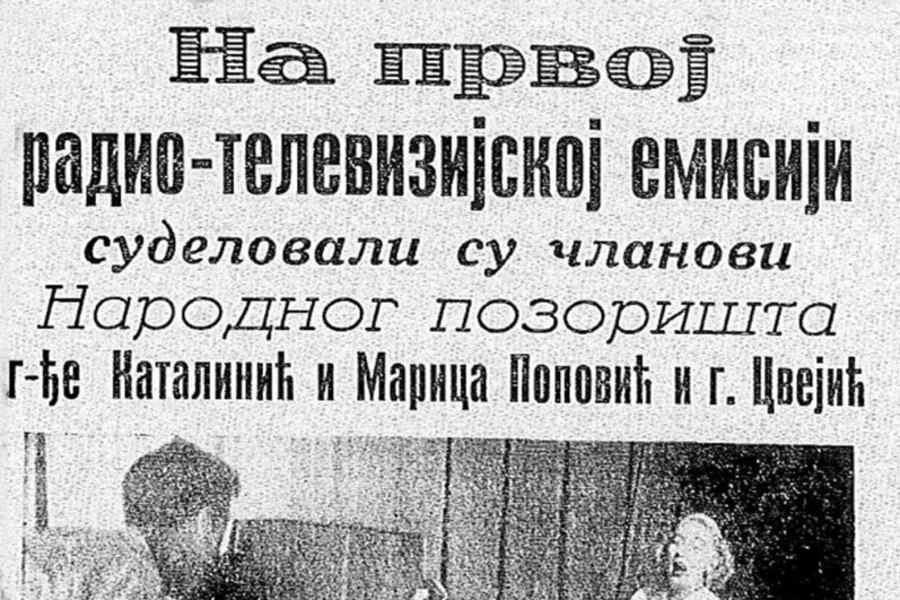 The tale of the first television set

That summer of 1938 a lot of dust was kicked up before the Autumn fair in Belgrade. Even though it was only its second year in a row, it was predicted that it would draw a large number of visitors. In the previous year the organizers were happily rubbing their hands considering the success of the manifestation. Now, the impatience was even greater thanks to the printed editions which months in advance reported on a new invention, never before seen by the audience.

“Television is here, now nobody can lie!” were the news reporters’ main comments back in the day, adding fire to Belgraders’ curiosity. Imagine the excitement when the announcement came that the new marvel of technology was coming straight to the capitol of the Kingdom of Yugoslavia.

It wouldn’t just be a fair attraction, but an invention that completely changed the world. The August edition of TIME announced this event with the following statement:

“A large company from Holland is bringing us a gigantic television station. This is the first time that television sets will be shown in Yugoslavia. The sets have already arrived to Belgrade. For the duration of the Fair, Belgraders will be able to follow the receiver and transceiver in several booths.”

At the same time the preparations for the premier television broadcast were well underway. Travelling broadcasting equipment cars and the machinery mounted around them could be seen in the pavilion of Phillips, the Holland company, not far from the fair building. And right next to the pavilion there was a small studio from which the broadcast was made to the grand pavilion. While the audience could follow the entertainment program, the small studio was equipped only with the bare necessities. One microphone, a brown fabric background and a device similar to a camera.

The arrival of TV to Phillips stand wasn’t just eagerly anticipated by the Fair visitor. The journalists of TIME magazine were also impatient, and so were the participants of the program, members of Belgrade theatre and radio. Despite their many performances in front of numerous audiences, excitement did tickle both the actress Blazenka Katalinic and the opera singer Zarko Cvejic.

It was unacceptable for anyone to come out in front of the audience unprepared, so a trial broadcast was held before the fair and the members of Belgrade radio, dressed in traditional national garb, found themselves in front of the cameras for the first time. All this was organized under the watchful eye of Milosav Vasiljevic (then the director of the fair) and after a successful trial run – the spectacle could begin! 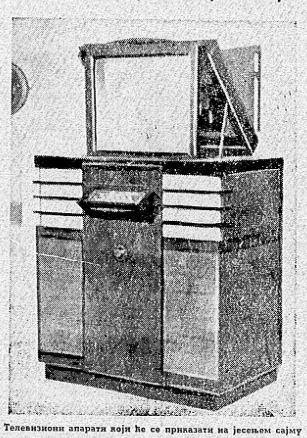 The first words of the engineer Vasiljevic’s greeting speech at the start of the broadcast was enough to silence the audience who breathlessly waited for this new-fangled device to work. The performances were broadcast one after the other – from the actors’ performances, through Mrs. Katalinic and Mr. Cvejic’s repertoire to a movie transmission from Vienna and footage of a Venetian panorama.

The long-expected spectacle couldn’t go by without sporadic gaffs and funny moments. The technology of the time demanded that the entire studio was bathed in obscure, yellow light. This type of lighting was not at all flattering to the appearance of everyone present which caused wonder, laughter and even jokes at the expense of everyone who were participating in this unusual experiment.

Still, the most interesting were comments from random visitors:

“What do you think it will be like when television becomes so advanced that all you need to do is push a button and see whoever you want, no matter where they are?”

Proof of the boundless imagination of Belgraders can be seen in the following remarks:

“Imagine when this thing reaches such a level of advancement! Won’t that be able to halve the power of man? That you can’t hide anywhere or lie to anyone. They see and hear you immediately? In the future it will be really difficult for people to lie and hide. Fortunately, they may not have the need to!”

If by some miracle they were able to peer into the future of television, they would’ve probably bitten their tongues. By the end of the manifestation, over 200,000 curious visitors had witnessed this new marvel of technology and the Autumn fair that year was remembered both by its great atmosphere and by the record number of visitors from all parts of Serbia.