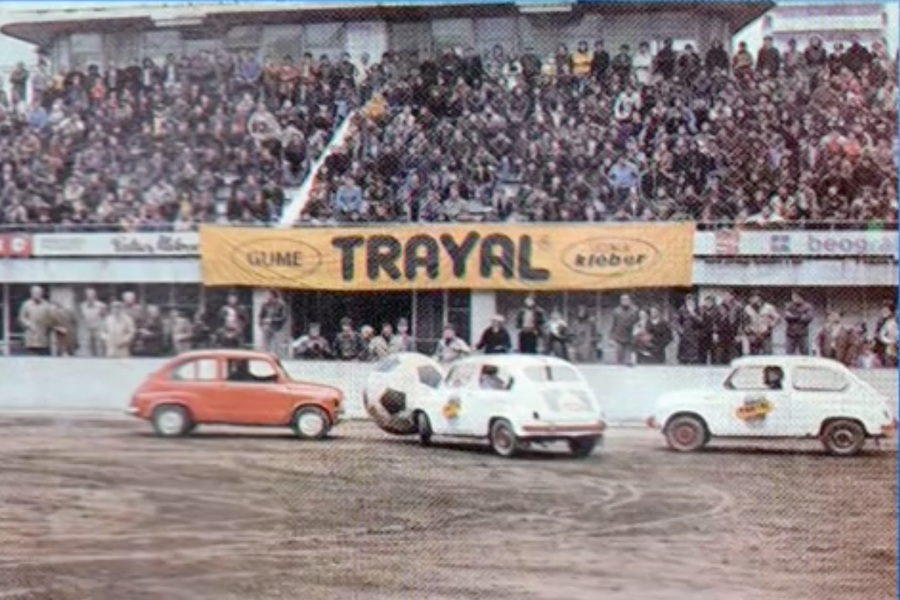 When the national class chased the ball around Tasmajdan

We welcome all fans of sports and leisure to the first carball game in Europe. Tasmajdan in Belgrade is packed full. A crowd of 1,500 people – that’s 3,000 eyes – all fixated on eight powerful beasts of steel. Each of them, with its 750 cubic centimeters of engine will attack the small 1,5m football and try to drive it into the opponents’ goal.

On the left side of the field start the red-colored “Fica” cars belonging to Red Star football team, on the right they are opposed by the white-colored members of Belgrade football team. Who will be favored by victory on this derby, on 14th of May 1978.

Aaaand there they go. Belgrade gets the ball first and advances towards the opponent’s goal. But no, no, no, the players miscommunicate. The defense managed to intervene and prevent the white team from breaching.

After several chances and nail-biting dribbling escapades, sliding defenses and other maneuvers, the wheels of Red Star pierced the defensive line of Belgrade. The white team’s net shook in a severe breach across the center of the field.

Belgraders recover along the left side. They shoot. The ball grazes a defense player and GOOOOOOAAALLL! Tasmajdan is on fire, glowing smiles on the fans’ faces. 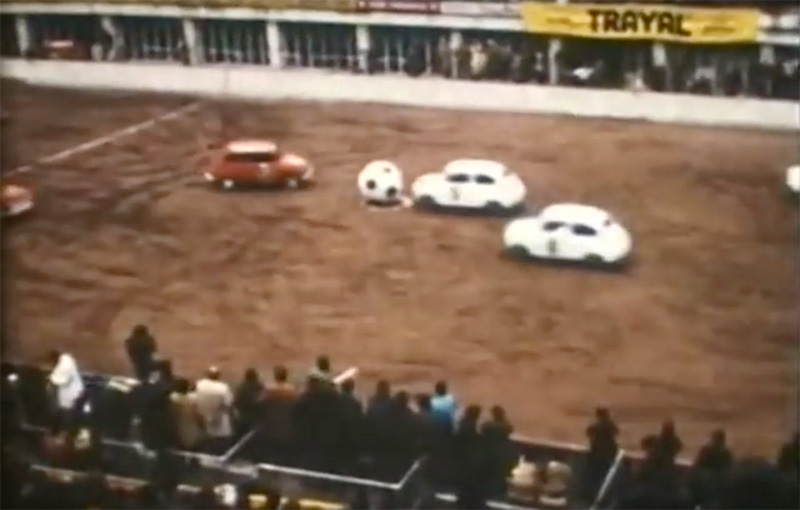 What is happening now? A player from Belgrade is standing on his goal and not moving. Red Star seizes the chance and shoots directly into the door of the surprised “Fica”. Another goal! It’s 2:1 for Red Star. Tasmajdan is boiling with excitement.

Ow, what a foul! Referee Branimir Peric – Joe, the idea creator of carball who participated in the first YU rally in 1967, the man who travelled the world in his Golf, had no choice. He gave a penalty shot to the Red team. Gooooaaaall! The ground shook, the sky cracked open. Is there hope for the players of Belgrade? Was their armor too dented by this goal?

And yet here we are on the Red team’s side. The White team, like a bulldozer, pushes the ball through their ranks. They almost knock down the edge of the goal, but yeeeeees! Another goal for the Belgrade team. Such excitement.

What’s happening now? The White team is attacking again and gooooooal. The score is tieeeed!

Referee Joe signals the end. The fierce machines are battered. The team members do their best to bump out any dents and cool their engines. It’s time for penalty shots in National class.

An exciting game, fierce bumping and 70 minutes of shining sportsmanship. Everything ends in Red Star’s victory through penalty shots. The display shows 8:7 and the giant ball can finally take a break.

Once again the good old “Fica” car shows its superiority and agility envied by all.

Until next viewing, enjoy sports.

PS: If you never knew that a famous Spanish matador fought bulls in Tas, read the story: Korida na Tašmajdanu.