The St. Trinity church is an ortodhox temple in Zemun, in Gronja varos, dedicated to the holy Trinity. The construction of this modestly sized church began in 1842, on the foundations of a chapel that had been there previously. Its construction is the result of investment and effort of the citizens of the then Gornja varos which persisted throughout several decades, to ensure the funds and get agreement from the Austrian powers and administration which is said to have tried to foil this request using all available means. It wasn’t until the end of the 18th and begining of 19th century that the ortodhox citizens living in this district managed to gather enough people (1300) in order to put in an organized effort to fund the project themselves, and pay to employ a priest there. In addition to the items necessary to hold mass, they also had a donated icon of the holy Trinity to whom the temple was dedicated. Finally in 1817 the Austrian emperor Franc gave an all clear for the construction of the church.

The church was built in a baroque style, using designs by Jozef Felber, and it was consecrated in 1842. The academy painter from Zemun, Zivojin Petrovic, painted the rood screen. Today the temple keeps various culturally important items, including the field worker and masonry-carpenter guilds’ banners. The church has the most beautifully decorated port in Zemun.
Up until 1902 the archpriest of the church was Dimitrije Ruvarac, until he crossed over to Sremski Karlovci.
The church was built as a single-nave building with two shallow choirs and an arched barrel vault, reinforced with 4 ports. The apse is semicircular, vaulted quarter dome reinforced with two semiarcs, dependent on the final arc of the vault. It was built in the baroque style with elements of classicism. The west facade is a bricked baroque decker and the belfry tower is covered with a metal "cap" and a cross on top. The corners of the tower are strengthened by pilasters and arches around the windows.
Above the western portal there are three windows, two of which are blind, subsequently painted. In the middle above the cornice is a tympanum, a side bazisa tower consists of two simplified wings. Both sides of the facade have 5 windows, of which three are medium in niches. In addition, on each side under the other window are small oval windows, which are subsequently opened. Double windows are framed consoles and bows found around windows and bell tower.

Below secondary windows are portals on the sides and a door framed by pink limestone, and above them were released on consoles ranges. On the apse are three windows.

The interior of the church is characterized by a cross inscribed with shallow choirs. In the 50s of the 19 century altar was separated from the nave painted iconostasis, while the nave parapet has split the left and right of the church over which the chorus with two pillars, thus separating the narthex of the ship.
The icons are painted in oil on wood. Carvings are cut shallow and composed of a bag forming nuggets with the leaves. The pillars are grooved, with Corinthian capitals and Ionic volutes of wood. Tree pillars are painted white, and capitals in gold. All carvings were gilded.

The frescoes on the walls of the temple were painted on three occasions. The first time since the construction of the church and the author of the frescoes was Živojin Petrovic. In 1933 the iconostasis had maintenance, and the wall paintings were restored, plus some new ones added. Andrej Bicenko, immigrant from Russia, in the choir area painted Christ with children and the Christ Child in the Temple, then in the nave of Christ with the Samaritan woman and the composition story of the Good Samaritan. Re-cleaning of icons and frescoes, was executed in 1991, and made the gilt iconostasis. 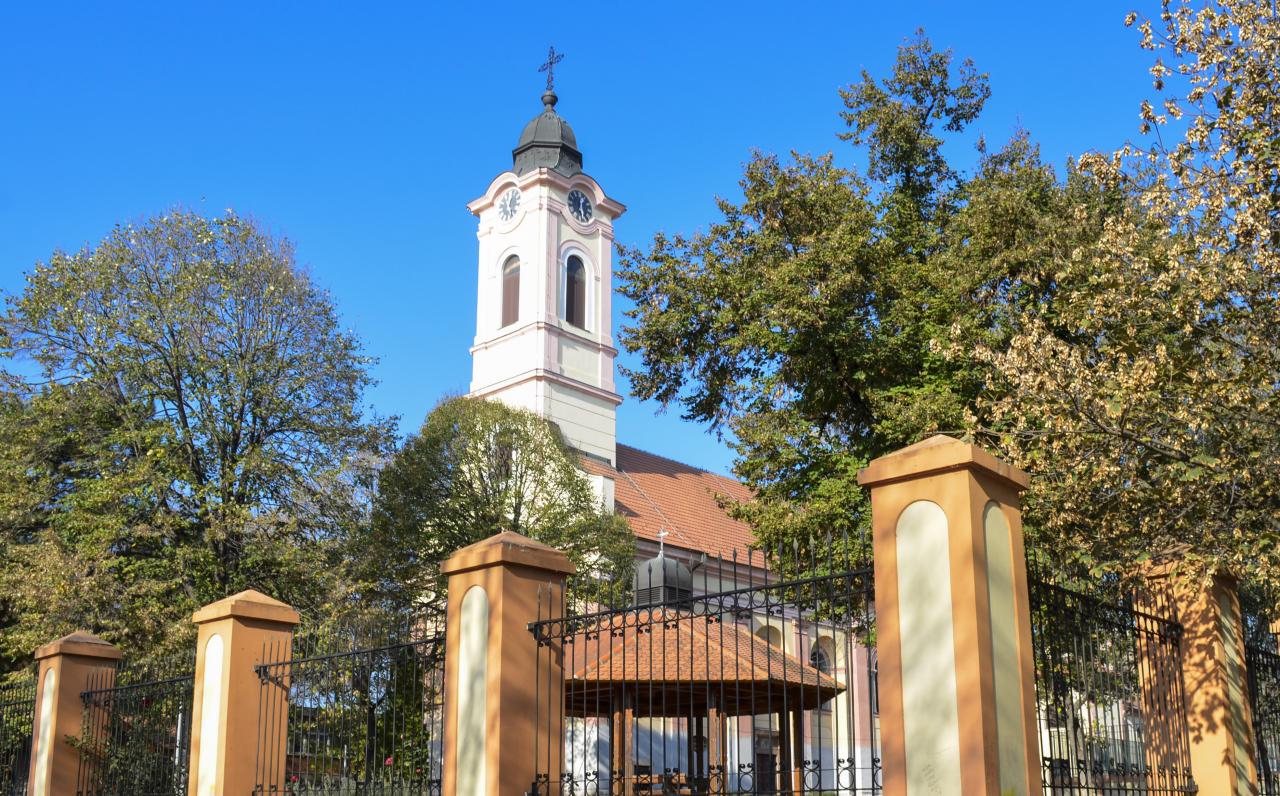