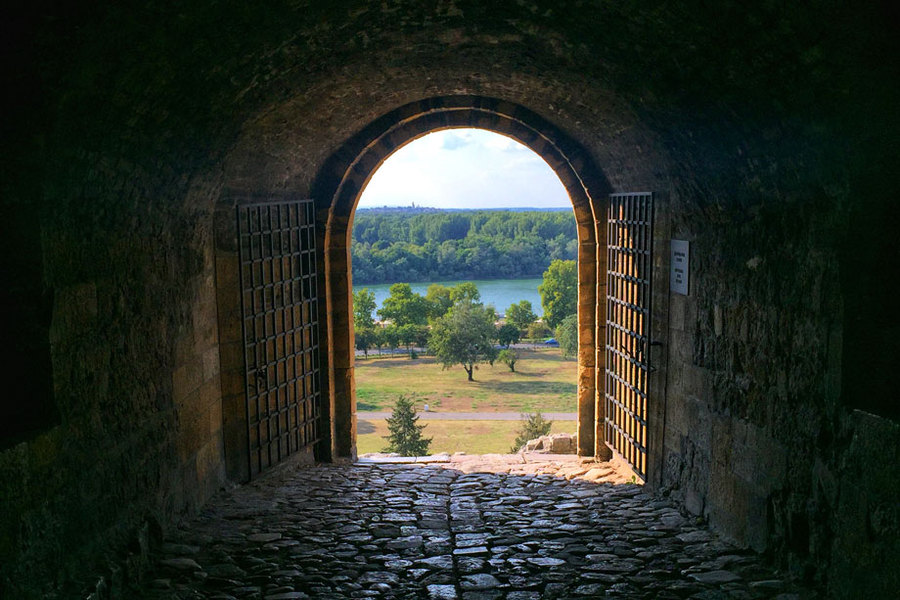 How many gates does Belgrade have?

It isn’t easy to find a city with such a turbulent past as Belgrade. The clearest proof of this probably lies with its gates. They tell the story about the history of the city atop the confluence of Sava and Danube, from Singidunum to Belgrade. They are the contemporaries and witnesses of historic changes.

Once the south gate of the city, today a pedestrian crossing

With a trip in a time machine, we transport ourselves to the days of the Turkish reign and land into the Kalemegdan fort. What do we see around us? We see 20 city gates. But some of them date back to the days of Singidunum. The first gates were constructed by the Romans and where today we cross the street between Knez Mihajlova and Kalemegdan is where there used to stand the south gate. Its remains were uncovered in the basement of the city library, which is positioned on the crossroads of that area – today traffic light and once entrance to the Roman fortification. The second Roman gate used to be located across the street in the park with the bust of Milan Rakic. 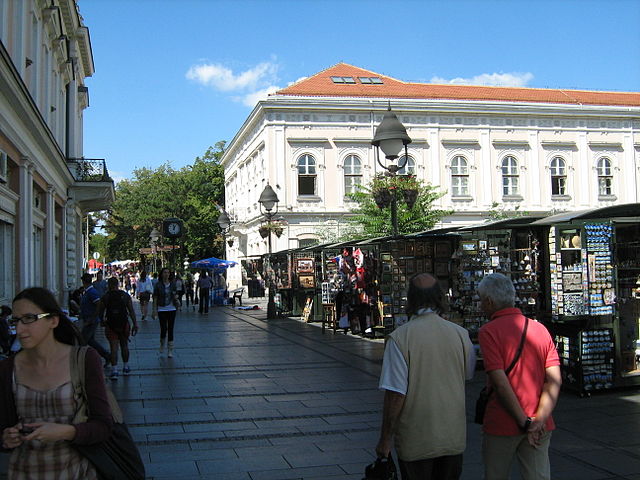 In addition to these there was also the northwestern gate. It looked out into the confluence of Sava and Danube and is located approximately where today stands the Defterdarova gate. Defterdarova is inside the fortress walls and steep stairs connect it to the lower city. To the right of it is the famous dried up drinking fountain named after Mehmed-pasha Sokolovic. This gate is located opposite from the Sahat gate. The Sahat gate is the south-east gate which is connected to the interior Stambol gate with a wooden bridge.

In addition to these, there also used to exist the North-West gate. It looked out into the confluence of Sava into Danube and was located approximately where today stands the Defterdarova gate. Defterdarova is within the interior walls of the fort and connected by steep staircases to the lower city. To its right is the famous dried up water fountain of Mehmed-pasha Sokolovic. This gate is located opposite from the Sahat gate. The Sahat gate is the South’East gate which is connected to the interior Stambol gate with a wooden bridge. The bridges were made out of wood so that in case of an attack they could be burned down, stopping the attackers from advancing inside. Above it is the Sahat tower. What’s interesting is that the gate itself was constructed by the Venetian engineer Andrea Kornaro during the Austrian occupation who then crossed over to the Turks when they took over the fort and continued to create for them.

The famous gate from Bajaga’s song “Ruza vetrova” is recognizable for being located between the two round towers. Constructed in the 15th century, this gate didn’t get its name until 3 centuries later, when the Turks used it as a dungeon. It’s connected with a bridge to Leopold gate, named so in honor of the Austrian emperor Leopold I.

Karadjordje gate got its name after Djordje Pertovic Karadjordje who passed through it in 1806, liberating Belgrade. Seven years after, when they occupied Belgrade again, the Turks bricked it up to stop some new Karadjordje from ever passing through it again. It was re-opened after WWII.

The King-gate does sound pretty royal. It is located on the opposite end from Despot’s gate (which is also the most well-preserved medieval part of the fort and was constructed during the reign of Despot Stefan Lazarevic. We reach the King-gate by descending a short flight of stairs that pass by the famous Roman well. It is connected to the rest of the city by a bridge which, unlike many others, isn’t made out of wood but rather is paved in cobblestone. Under the Institute for monument preservation, towards the Roman well, there is the Iron (Demir) gate which is walled up. In the lower city there are also:

The gate of Karl VI which stands in honor to the Habsburg ruler and which is one of the few Baroque constructions in our city.

The main entrance to Belgrade port during the Turkish age was the Harbor gate. Two water gates, one of which is still in use on the north ramparts of the lower city while the other is in the west one.

Vidin gate, constructed in the 18th century. It was blown up by the Germans during Belgrade’s occupation in 1944. Rather, its moat was blown up and alongside it the gate as well. Another Vidin gate used to stand where today is the 1st Belgrade ‘gimnazija’ which has a commemorative plate that mentions the gate.

After liberation from the Turks, the Serbian and Turkish district (bigger part of old town) was also brought down and along with it all its gates. This includes the abovementioned Vidin gate, Stambol gate and Sava gate. 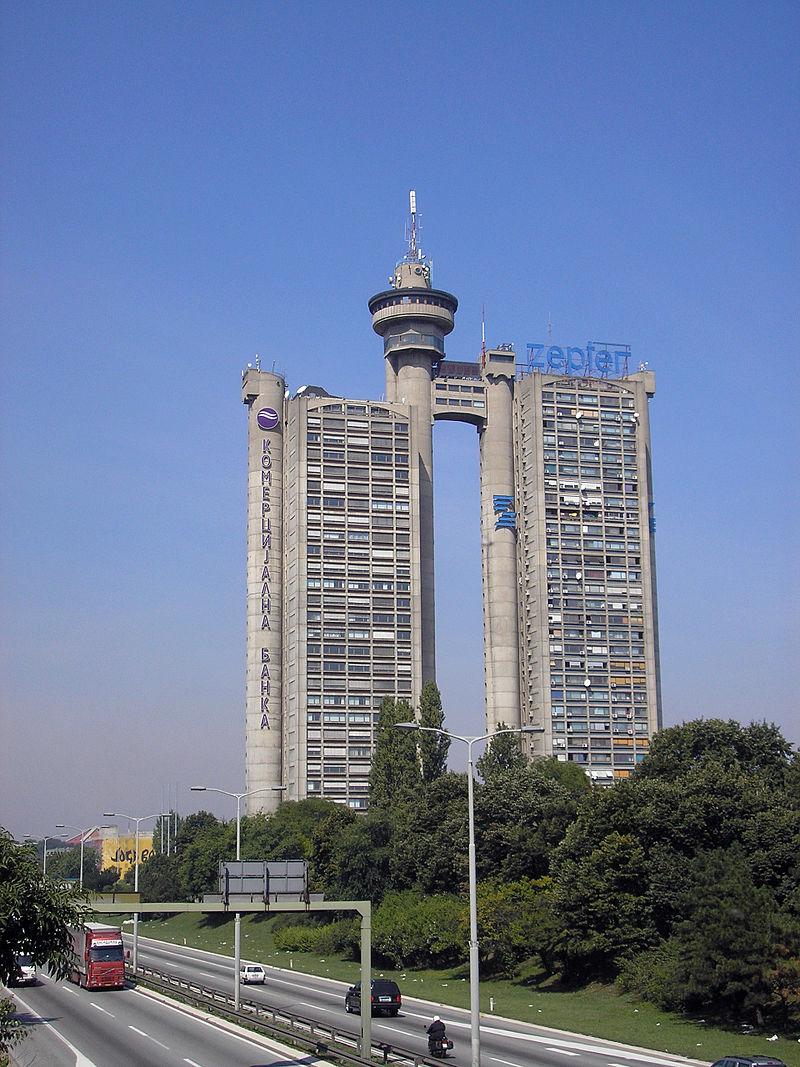 What is so gray in the white city?

After you’ve been away for a long time and returning from a business trip, vacation or any trip, what’s the first thing to make you smile knowing you are home? What’s the first sight that welcomes you back to Belgrade? To this question the average Belgrader and anyone feeling as such would immediately reply “Genex” and “Rudo” – the west and east gate. And this shouldn’t surprise us because these are symbolic to Belgrade – the West and East gate of our White City. These are the city landmarks that are at the same time a visual landmark for anyone explaining you how to get around, but also the recognizable backdrop for many a Belgrade movie, TV show, post card, photos with beautiful sunsets or sunrises and more.

Two skyscrapers connected by a bridge know as the Genex building or, better yet, the West gate of Belgrade are the first association to New Belgrade and the Student home because it is located just in front of the student pavilion complex right next to the highway. The 35 floor Genex tower also boasts a rotating restaurant on the circular top of the building which offers an unusual view of Belgrade and during nice days also Srem and Sumadija. For this dome to rotate back to its starting position, it needs 24hrs to travel 360 degrees. This is the second-tallest skyscraper in Belgrade, only 6m shorter than PC Usce which stands 141m tall.

Opposite from the West, the East gate of the city is located in Zvezdara. It consists of three connected skyscrapers forming a ‘staircase’ of sorts and its official name is Rudo, after the town in Bosnia and the birthplace of its architect Dragoljub Micovic. These 28 story buildings are 85m tall, facing one another and between them in the middle is a plateau and a kids’ playground.

Seeing how the skyscrapers are located far away from the highway, their visibility and height makes them an easily noticeable ‘welcome’ to anyone entering the capitol from the airport of from the direction of Nis. Each of them is magnificent in its own way. 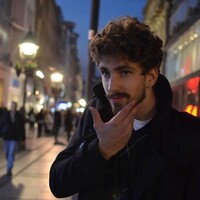