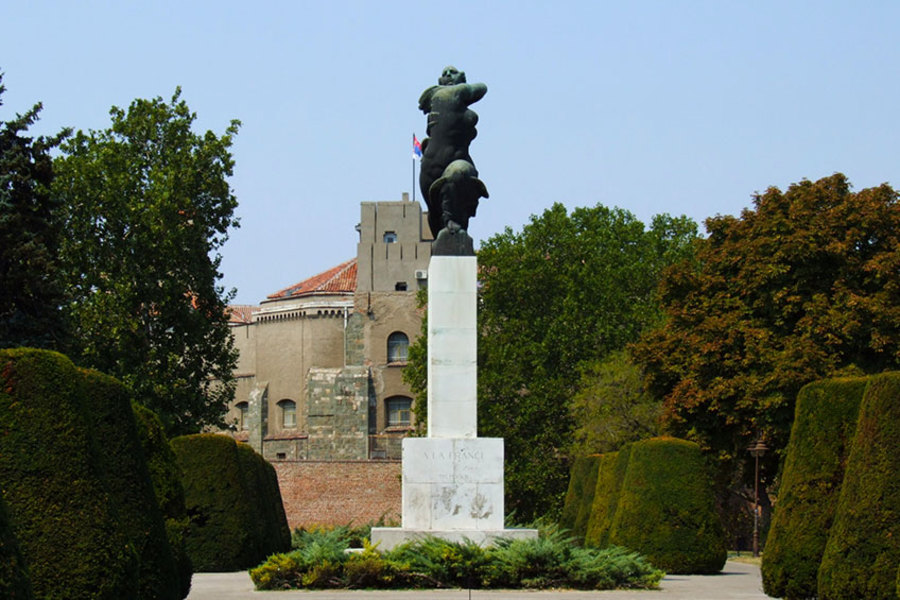 One of the greatest sculptors of religious renaissance was born in Slavonia. He worked as a stone-cutter’s apprentice in Split and obtained an education in Vienna, where in 1905 he organizes his first exhibition with the group Secession, after which he became famous for participating in international exhibitions. With his life and creation in Paris and Rome, Mestrovic also lived in Belgrade where he sculpted the most famous monuments in our capitol’s history.

After he condemned Italy’s desire to absorb Dalmatia and refused Hitler’s invitation to visit Berlin, he was imprisoned, but managed to escape with the help of the Vatican to Rome, and later to Switzerland. When Yugoslavia invited him back but he replied that he had no wish to live in a communist country. He eventually went to USA and 10 years later became a professor at Notre Dame University. He returned to Yugoslavia to visit Aloysius Stepinac and Josif Broz Tito. His children’s premature death left its trace on his work and he passed away in 1962.

His works are a part of permanent setups for many global museums and the ones available to Belgraders every day comprise our city’s immense cultural heritage. They have primarily historical value, they symbolize our nation’s fate and struggle and the excellent artistic quality shown in a high degree of semiotics and composition.

The famous story of the Victor begins when Belgrade ordered a monument which would represent a victory of Serbia over the Ottoman and Austro-Hungarian military. The city officials wanted there to be a fountain in Terazije as a symbol of triumph in I Balkan War. In the center of a pool of water there was going to be a five-story pillar, to symbolize five centuries of slavery and the imposing Victor on the top. The composition was to be named “Allegory”, an after eight months of hard work by Mestrovic, the sculpture of the Victor was sent to Czech Republic to be cast. However, seeing in the meantime WWI began, the sculpture remained there until the conflicts ended. Years of senseless violence and poverty have made it so that the statue was completely forgotten. But in 1927 it was finally decided that it should be set up. After much arguing about where the statue was located, it was decided that it should be set up in Terazije, only minus the originally planned fountain for which there wasn’t any funding.

The story, however, didn’t end when the monument was finally erected. In fact, the problems seemed to only begin then because the entire township rose up against it, morally outraged. A nude man in the center of Belgrade was described as a mockery of the city, an undignified symbol that would, apparently have a poor influence on the morality of Serbian girls, while the ladies would shield their eyes when passing by it. The newspaper had all kinds of words to say about it. And while certain individuals from the elite layers of society tried to defend the artstyle of the famous sculptor of “Heaven”, they wondered more and more often why the Serbian “Victor” isn’t wearing his Serbian hat and shoes. There was such a commotion over it, that a committee was founded to decide the fate of the Victor. It ended up in upper Kalemegdan as a symbol of Southern Slavs uniting.

Even though many today think that the monument was set upon its 17m pillar in order to be visible from all parts of the city, it was actually done in order to move the nude Victor as far away as possible.

After its new circumstances – the victory over the Austro-Hungarians – and the creation of the Kingdom of Serbs, Croatia and Slovenians, it was decided that the monument should stand in Belgrade’s fortress that was in the hands of the Turks for so long and served as only the place where Serbs were taken to be tortured or executed. And so our monument finally took its place, symbolizing the end of feudalism, victory, unification...the Gray falcon on his left arm never sleeps and watches the dark forces in order for the sword in his right hand to overcome and chase them away.

Monument to the Unnamed hero

Construction of the monument, which was made between 1934 and 1938 on the top of Avala, was initiated by the King Alexander I. It was designed to be a memorial to the victims of WWI  and today the years that were marked on it show that it also stands for the victims of the Balkan wars. Still, the story of the monument to the Unknown Victor began a few decades earlier when the people from surrounding villages started an initiative to construct a monument to the unnamed Serbian soldier whose grave was discovered there. It was a soldier who was struck by an Austro-Hungarian grenade. He was buried by the Germans there in 1915, in the crater of the explosion that killed him and marked his gravesite with the words “Ein unbekannter serbischer Soldat”, that translates as “unknown Serbian soldier”.

When the committee in 1921 dug up the hero’s grave, they found that his remains were buried without the left part of his chest that was blown up by the grenade and his head was laid upon the grenade with which he was buried. The remains indicated it was a very young man or a boy, even. He didn’t have his dog tags, so it’s assumed he belonged to the third conscription wave which was recruited hastily, so there was no time to make name tags. What helped the soldier be identified as a Serbian soldier were the shoes and the bullets he was squeezing in his hand that belonged to the Serbian army.

The neoclassical building “Monument to the unnamed hero” was erected in the form of a Greek temple in marble stone from Jablanik. Mestrovic took inspiration for this famous Serbian monument from the tomb of Cyrus the Great, a Persian ruler.

Monument of gratitude to France 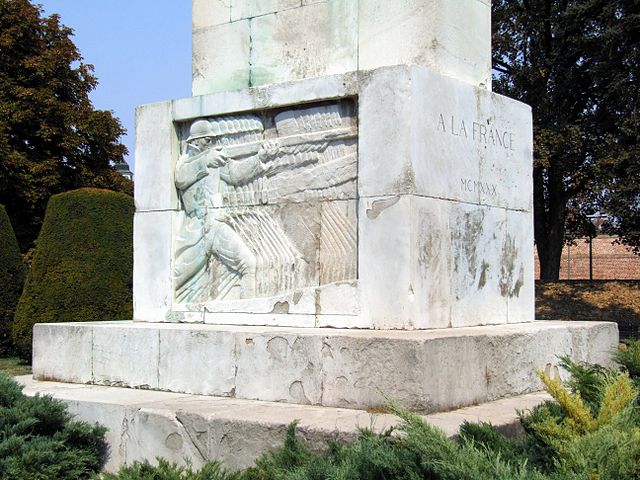 Another famous work of this artist today decorates Kalemegdan. It is the monument in the park which was erected in 1930. Nine years later, Belgrade reached the decision to erect a monument to the fighters who fell defending Belgrade in 1915 in the Great War. Four years later, the Society of former French schools and the Society of the friends of France starts the official initiative. Even though the original idea was to erect the monument in Paris, France still left it in Belgrade, expecting it to uphold its politics in the Balkans after everything. Although in those days Mestrovic was struggling with the press because of the nudity of the Victor, he was still chosen to make the monument almost 5m tall and weighing at almost 5t. The monument depicts a strong woman with a sword in her hand, symbolizing France rushing to aid and defend Serbia.

On the east side of the pillar there is a relief of a sitting woman, the symbol of Sorbonne and the Serbian youth education in France, while on the other side there are Serbian and French soldiers, a symbol of cooperating to breach the Thessaloniki front. 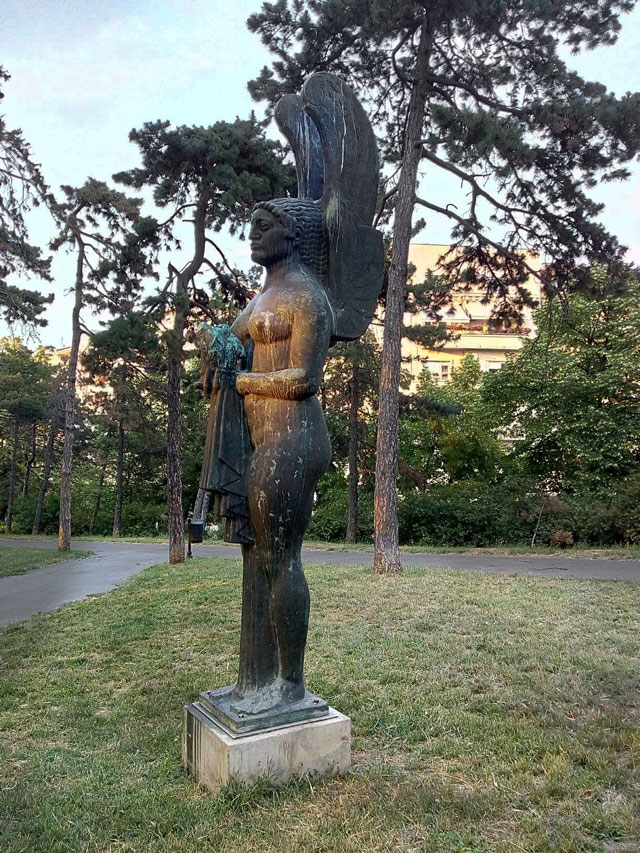 Kalemegdan is a true treasure trove of works made by this famous Serbian sculptor as well as his third biggest achievement, the sculpture called “The Angel of Death”, almost 4m tall. It belongs to the architectural-sculpture complex “Vidovdan temple” that Ivan Mestrovic worked on throughout his lifetime, but never fully completed. Many of those sculptures remain in the National museum today. The Angel was created in 1911, just before an exhibition in Rome. It spent a lot of time in Opovo and was rediscovered a full century after it was created, in Belgrade in front of the art pavilion “Cvijeta Zuzoric”. 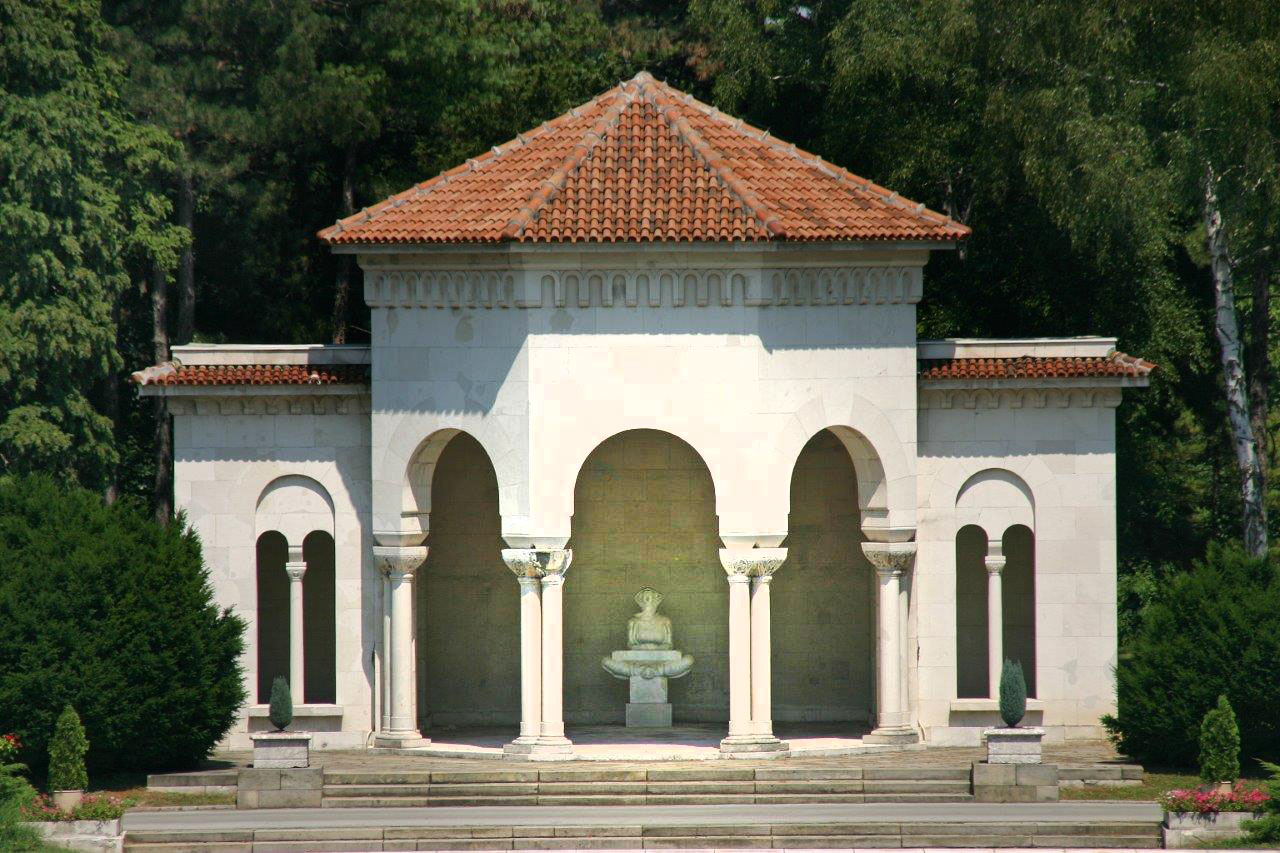 Photo: Serbian royal family - the pavilion of the White court where the sculpture is on display

Maybe the biggest stigma on Ivan Mestrovic’s name was the fact that he was born in Yugoslavia, so each of his works has an often unpleasant anecdote related to it. One of them is the tale of “Povijest Hrvata” (Mother of Croatia) sculpture. This work was created in 1932 by Mestrovic for the Starohrvatski museum in Knin. It is a statue of a woman in Dalmatian national wear, resembling the visage of Mestrovic’s mother Martha. In her lap she is holding a stone tablet carved in Glagolitic script, caring for it and protecting it. Despite this, the sculpture ended up in the garden of White court in Belgrade, which resulted in a public scandal when Croatia requested its return a few years ago. After a very harsh reaction by the media at both sides, the Archive of Yugoslavia presented account records of the National bank for Mestrovic’s fee in creating the abovementioned work. He was paid 200,000 dinars and it was confirmed that king Alexander paid for the art.

There are various stories on why the statue is in the court, and one of the most famous ones was the need to maintain peace and offer a gesture of friendship, by placing “Mother of Croatia” right in the center of Belgrade’s court.

To finish with, we should mention that in addition to monuments, Belgrade also presents the works of Ivan Mestrovic at the National museum whose currently only usable entrance is currently adorned by his caryatides and where there are also monuments such as Kosovka devojka, Milos Obilic, Widow, Kraljevic Marko, Srdja Zlopogledja... a casting of Nikola Tesla’s bust who was a good friend of Mestrovic and asked him to build a monument of him is also located at Nikola Tesla’s museum. 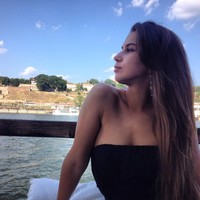 Born in 1991 in Belgrade, after completing her studies at the John Nesbit University she also completed her master studies in Communicology at the Political Sciences University in Belgrade.