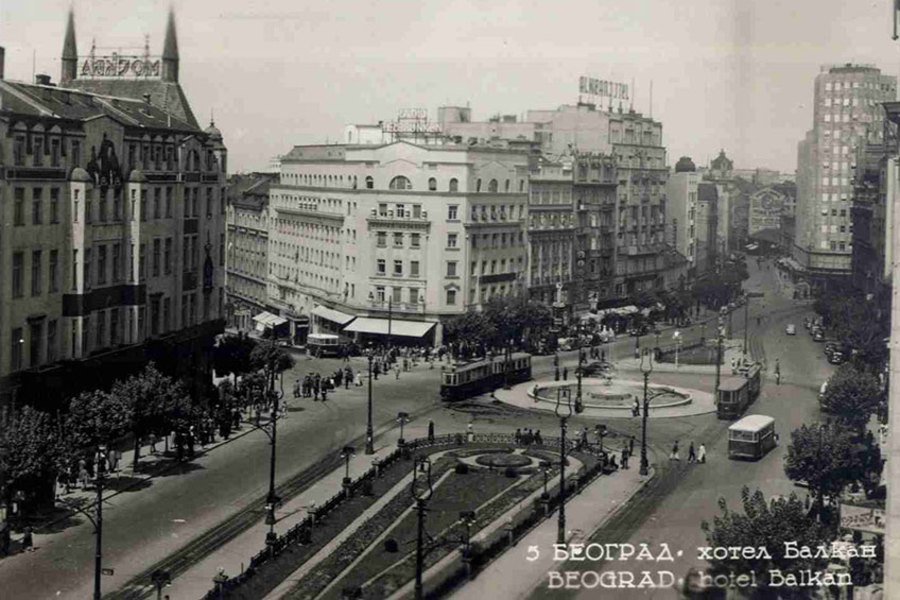 The history of public transportation in Belgrade - from running horses to validators (pt. 2)

The idyllic times were suddenly interrupted when the First World War began. In the devastation of Belgrade, inevitably the public transportation along with its electrical central and network were damaged.

Pericles Cykos from Milan who had the concession for public transportation couldn’t fix everything that needed fixing fast enough, so the city authorities after Belgrade’s liberation in 1919 took the electrical central under their management along with the tramway traffic.

Everything had to be replaced, from the poles in the tramway lines, to the railway and the trams themselves. The program for all the works and supplies was made and Belgrade transportation was renewed in phases all the way up to 1932.

Between 1920 and 1924 about 6km of railway lines was replaced and 3km of new railways was constructed. By the end of 1927 one private company introduced regular bus traffic to Belgrade, using modern busses with pneumatic tires. Passenger transportation was done for the first while in the lines Kalemegdan-Savinac and Terazije-Dedinje. 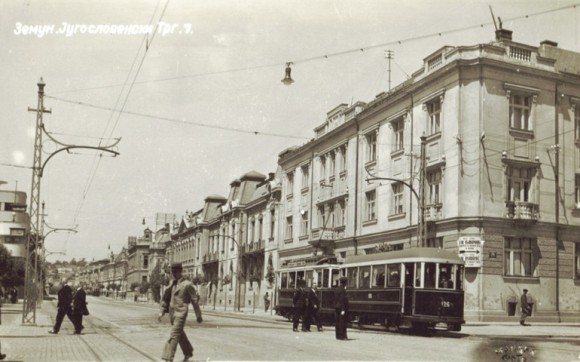 Photo: DVD Zemun then and now

In November 1935 the first tram, number 14, connected Zemun and Belgrade and thousands of people were thrilled for the event. Popular marketplace vendors who sold their goods in Belgrade finally had a way to get there more easily.

Before WWII Belgrade had 10 tramway lines and overall 104 trams and 60 trailers, and in addition to that the tramway and lighting directive had 87 busses at its disposal which operated in 12 bus lines. 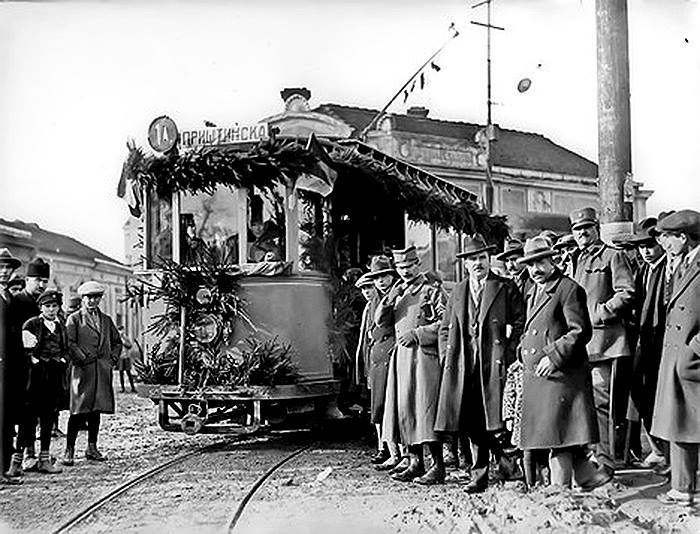 In our capitol city currently there are 11 tramway lines. Among the numbers reserved for this type of transportation and currently without a route of its own is the first line – “Number one”.

Up until 1947 the line number 1 connected Kalemegdan and Slavija. In time this line was shortened and extended and inbetween the two World Wars there was even a temporary line 1a that went from Slavija to Red Cross. Seeing how these lines went down the once Pristinska street, these tramways were known as “Pristinci”.

With the arrival of the trolley lines to Belgrade, the first line of city transportation was given to the trolley that traveled a similar route. However, when the route between Kalemegdan and Leka’s hill was renamed “Eleven” and the “One” was lost from the traffic, until 1978, when it began traveling again between Kalemegdan and Rakovica. Sadly, at the start of the 90’s, the tramway number 1 permanently stopped running.

The disappearance of “number one” has long puzzled Belgraders, but the solution to the mystery was very simple. “One” was discontinued because not many citizens used it. That is all.

City transportation under the Germans

The world didn’t stand still. WWII brought new destruction. In the bombing of Belgrade in 1941 around 38 tramways were destroyed, as well as 36 trailers and 10 busses. The bombs that struck the bridge of knight-king Alexander (Branko’s bridge) some of the lines from Belgrade’s side were terminated permanently.

Still, during the war years two tramway lines still worked in Zemun which was under the management of the Independent of Croatia. The trams ran to the bridge, that is to say the Fairground. Upon the end of occupation in 1944, the line number 14 was restarted in liberated Zemun, until it was cancelled three years later. 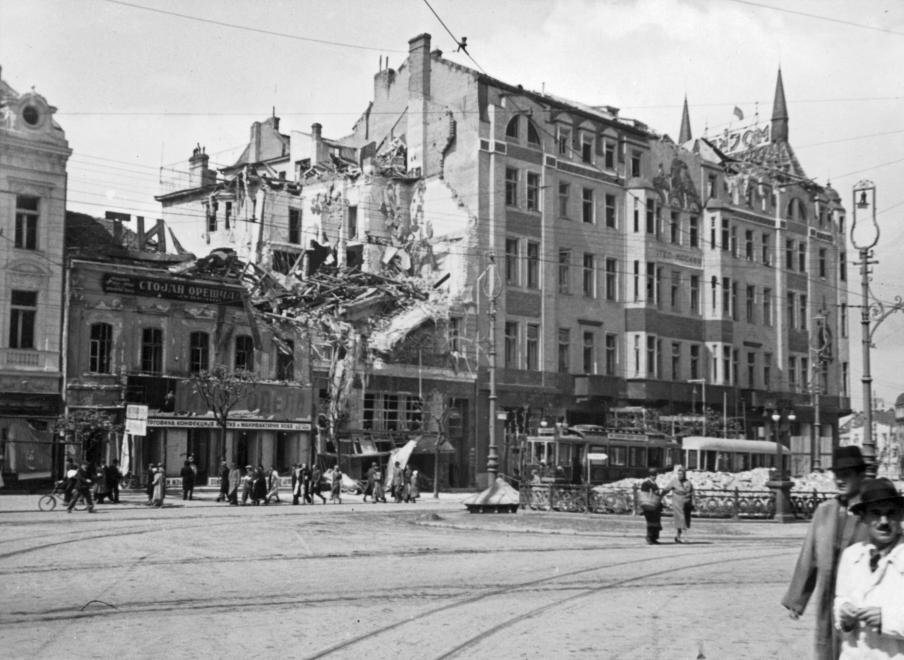 On the other hand, during Belgrade’s occupation, the Germans gave great attention to normalization of the tramway traffic and cleaning up the railway. With the goal of creating the atmosphere of ‘normal’ life. The first line to start working again was line number 6 that drove between Terazije and Cvetkova mehana.

- Those used to ride in first class are currently denied this pleasure, seeing how the tramway lines are operating without trailers. Jews are strictly prohibited to ride and the front platform is reserved for German soldiers.

Tramway traffic soon started again in almost all lines and 33 engine cars with 21 trailers were driving around Belgrade. The ticket price was between one to two dinars and students and war invalids were privileged.

During the occupation began the construction of tramway depot in the corner of Captain Misa’s and Visokog Stevana streets. This undertaking cost four million of dinars and the plans for the object included 12 driving lanes, 4 entrances and 87m of railway. The city authorities in October 1941 provided a credit for 50 million dinars for repairing engine carts and trailers that were unusable and the first repaired vehicles were in the streets already in December. 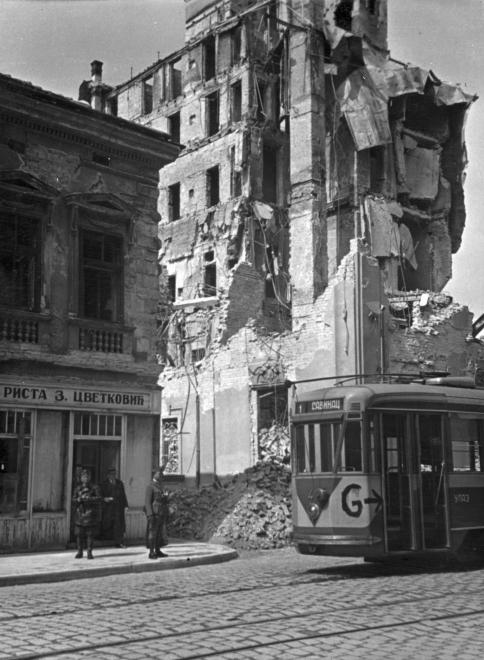 The then mayor of Belgrade, Dragomir Drago Jovanovic who was appointed by the Germans, reported the following: “We have established a unified price fare for the ticket and achieved an income of 40,800,000 dinars. Throughout 1941 we have transported around 16,900,000 passengers and over 1,8km of new tramway lines were constructed.

The citizens were required to prepare exact change for the mandatory tickets, or else be fined “50 dinars on the spot”. In order to speed up the traffic and prevent people from riding only for one or two stops, many stops were cancelled.

After the Allies bombed Belgrade on April 16 and 17 in 1944, the city authorities began restoring the traffic again. The first line that was up and running was number “2” and shortly after it lines number “6” and “10”.