The history we never learned happened in taverns

You descend into the basement of a stone building, down a musty set of stairs. Your hat is soaked with rain, but you don’t take it off because it goes with your suit too well. Your way is just barely lit by an oil lamp from a distant street pole. At the bottom of the stairs you see a heavy wooden door. You push it open and enter a whole new world: the air gray from smoke, filled with laughter and the clinking of glasses, accompanied by jazz played on a rickety violoncello from the corner. The only thing missing are some curves on a nice lady, or at least a voice higher than a baritone. However, you’re in Belgrade and the year is 1882. Taverns pop up one after the other, this is the pinnacle of Belgrade’s nightlife. By the end of the 19th century, there was a tavern to every 50 residents of Belgrade. The first bohemians are born – or perhaps that was just a romanticized name for drunkards. As morals would demand, their wives, sisters and daughters stayed at home.

We can still imagine a scene that seems right out of the movie “Midnight in Paris” b y Woody Allen and replace Ernest Hemmingway and Luis Bunuel with Branislav Nusic and Jovan Jovanovic Zmaj. We can go one step further and also believe the claim that first taverns in Europe originated not in Paris or Prague, but precisely in Belgrade.

Coffee on a rug

The Turkish cultural heritage has no doubt remained deeply ingrained in our lifestyles. It was precisely under their rule that the first tavern in the city began work around the middle of the 16th century – where else than in Dorcol. It is believed that in the Oriental style the furniture included several low tables around which people sat on the soft rugs distributed across the floor. The institution we grew to love and idolize for centuries to come was back then called “kavana” because inside they served “kava” (coffee).

The concept of “drop by for a cup of coffee” didn’t exist back then for a few simple reasons. For one thing, it wasn’t customary for anyone other than your closest family to drop into your home without a higher purpose, like attending your wedding for example. Another problem was that preparing coffee back in the day was quite the process. In a country where there are four seasons and lunch is cooked exclusively on a fire stove, coffee was a highly complicated endeavor. Imagine having to build a fire in 35 degrees Celsius just to brew a cup of coffee! Taverns, however, had the advanced technology of cinder ovens and hot water always ready to go. This meant that taverns were more or less your only option if you wanted to socialize and sip your favorite beverage. And speaking of beverages – it took a long time before taverns shifted their focus from serving coffee to serving mostly alcohol. This brings us to the scene from the start of our story.

The next stage in the growth of bohemian culture in Belgrade came in 1740, when the tavern “Crni orao” (Black eagle) began work in the corner of today’s Dusanova and Kralja Petra streets. The best in the city and adored in its time, “Crni orao” was the proof how far people were willing to go for good fun and even better exchange of ideas. It was housed in the first story of a building that you could only reach by climbing a rickety set of wooden stairs, while the ceiling was so low that even people of that time couldn’t stand up straight. You had to crouch your way to your drinks and friends – sounds fair.

A century later, prince Milos introduced a new law for tavern owners, who now had to adhere to certain standards and pay taxes. With the establishment of the tavern as an institution, the first breweries began work. In 1840 the Knezeva brewery, in ’73 the Weifert brewery, in ’84 the Bajloni brewery. If you are a fan of beer living in Belgrade around this time, you could choose between three big names – “Prvenac”, “Plzen” and “Salvator” beers. The center of the city, Republic square (then known as the Theatre square) was instead of museums and Communist buildings, surrounded by taverns – up to 16 of them. They continued through Terazije, Skadarlija, Varos gate to Ponkareova street and Slavija square. There begins the cultural, social and even industrial development of the 20th century Serbia. Utopian, artistic and political ideas are born, exchanged, traded. Business exchanges are arranged, theatre plays are performed, music is played and songs are sung. 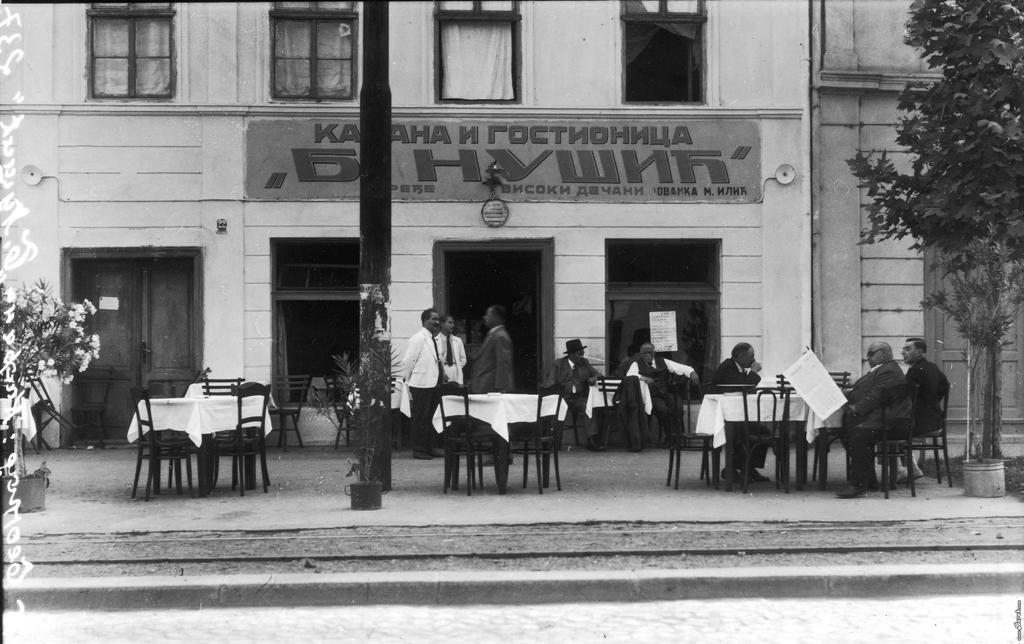 As recorded by chroniclers – “one sin leads to another”. That’s how the tavern community – more precisely their superiors – faced the first public forms of prostitution. Seeing how these were sadly the only women who would keep the gentlemen company at night in the city, business went very well for their employers. The girls were mostly immigrants from the surrounding countries who had no families, husbands or other kinds of protection nearby, and the laws stated that those caught in this line of work should be “thrown in the Sava river”.

A few decades later, women entered the taverns in a legal way and with a grand entrance – as singers!

This is the start of taverns as we know them today – back then paradoxically known as “Christian taverns”, seeing how these kinds of shenanigans weren’t allowed in Turkish taverns. The chairs, tables and perhaps plaid table cloths. The names of countless taverns came from their proximity to other important locations – “Skupstina” (Town hall), “Cubura” (bridge), “Kod dva jablana” (At two poplars). The ever-famous “Tri sesira” (Three hats) tavern which still exists today originated next to a hat store in Skadarlija. There were also more exotic names such as “Dva papagaja” (Two parrots) – named after the fact that next to it lived a man who owned two green parrots, a true attraction at the time. He would take them to fairs or even just outside his house where a crowd would form to admire the strange talking animals. Then, the tavern naming trends took to poetry and yielded many names you could use in association games “Young Arab”, “Golden barrel”, “Moonlight”, “Golden angel”, “At last hope” and the author’s favorite “Whose it wasn’t, whose it will never be”.

Nusic, who himself loved these colorful locations took notes in which he expressed his dissatisfaction with the new wave of taverns. If you are experiencing nostalgia for a time you’ve never even experienced while reading this story, this is an official reminder that everyone who ever lived has always thought that the ‘good days’ are behind us:

“There’s some new tavern in the suburbs of Belgrade that proudly named itself “The New Century. They say it has a modern design and in addition to great drinks and quality service, it also hosts a jazz band and holds dances. This tavern in the suburbs couldn’t have chosen a better name to mark the breaking period that our age wishes for. While the modern establishments with exotic names “Excelsior”, “Palas”, “Luxor” and “Splendid” have pushed out our old little taverns from the center of Belgrade such as “At Zmurko’s”, “Mecovalije” and “Daranela”, we the old Belgraders have accepted that a new age brings new times. The traces of old days disappeared one by one as each tavern was torn down along with the youth we’ve spent and buried there and we took off our hats in respect and whispered sad condolences as though morning a loved one.” 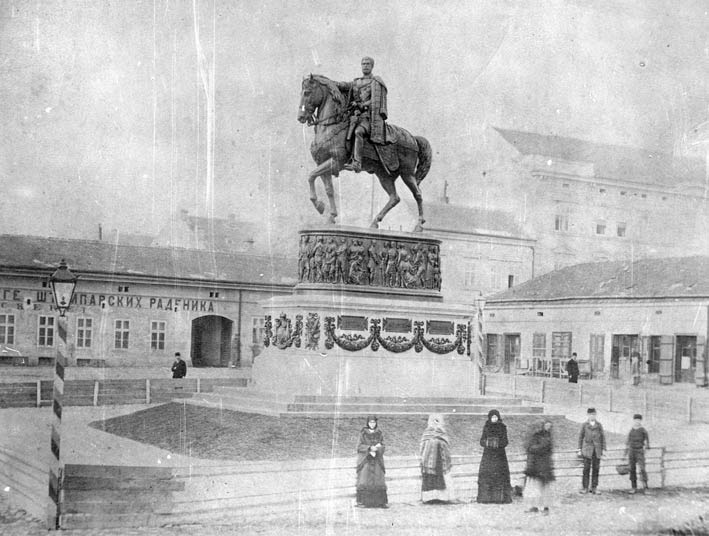 At the turn of the century in 1901, an end of an era came with the demolition of the “Dardaneli” tavern that once stood where today is the National museum. Tearing down the heart of Belgrade’s bohemian culture enraged the citizens so much that public protests were held. As those didn’t work, the crowd dispersed to other places such as “Kasina” and “Spring”. These migrations did not happen randomly. It was very clear in advance where the liberals will go, where the socialists and industrials will end up and where the regular folk just seeking some spirits after coming from the marketplace. In the restaurant of “Pariz” hotel the first cinema projection in the country was shown, and in the tavern where today the power company is located, the first light bulb in the city was turned on.

It’s hard to be radical and objective and decide whether the tavern culture today is changed or stayed the same. However, we do have a statement from a Dutchman who was in Belgrade on business at the start of the 20th century and said something that might sound familiar:

“Belgrade, in the day, has the air of a small – perhaps even a dead-end town. But in the evening, when I went to listen to Sofka in the tavern, with the violins and the tambourines, I fell in love with Belgrade even though I couldn’t understand a word of what people sang or said.”